The Guy Who Invented Chewing Gum – A Life of Many Firsts

The Guy Who Invented Chewing Gum – A Life of Many Firsts

John Bacon Curtis was the one who started it all – he ushered in the world of chewing gum, bringing the nation a new pastime and treat. In the process, he ignited many other firsts, most so commonplace we forget anyone could be first to do them.

Curtis was born in Hampden Maine in 1827. He went to common school for a few years then left to help bring in money for his family. He worked as a farmhand and later a “swamper,” clearing the underbrush and forests to make way for roads. At that time, the Native Americans of Maine used the  spruce tree resin to clean their teeth, exercise their jaws, and even heal  skin irritations and sores. They also used the sticky sap to repair their canoes. 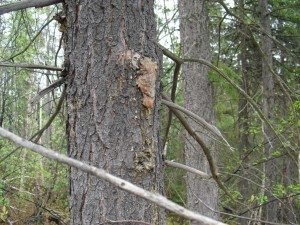 It was either Curtis’ time as a swamper, his familiarity with the Native American’s use of spruce resin, or both that gave Curtis, then 21 years old, an idea-why not make a gum that would appeal to a more general market. He, with help from his reluctant father, tested numerous possibilities, boiling the spruce on the kitchen stove, cleaning it, cutting it into strips, wrapping it, and, finally, sealing the deal with their own label. They named the creation “State of Maine Pure Spruce Gum.”

According to a bio of Curtis written in 1909, he went from store to store trying to sell the stuff for two days but didn’t have any takers. On the third day he found a shop willing to carry it. The gum didn’t sell well at first, but eventually had a limited following – not enough money to support the family in style but, evidently, enough to give them hope. In 1850, Curtis took the gum, patent medicines and other goods on the road as a wholesale “peddler.”

Although the peddler game was competitive, Curtis was aggressive and did well at it. The 1909 account quotes him as saying: “When the other fellows thought I was in bed, I was on the road. By driving nights I got in ahead many times, and had the trade all to myself.” He also claimed to have the best horses available for his buggy – and within a year had traveled throughout New England, raising $6,000.

That amount may have been enough – or possibly not quite enough – to encourage Curtis to expand his time on the road while his father oversaw gum production at home. They got their resin from a new subclass of workers known as “pickers.” An 1889 New York Times article, retold in the Adirondack Almanac (2010), described the position this way:

“…Very few people know how extensive [spruce gum picking] is, or how many people depend on it to help out a scanty living…Most of the Adirondack gum pickers are gum pickers from necessity, not from choice. They are a nondescript class… They are found among farmers, mechanics, lumbermen, guides, and even some of the young and robust maidens who dwell on the borders of the woods.”

To get the sap, the pickers scored – or wounded – the tree. The sap would bubble up to heal and fill the wound which, months later, the pickers would gather with an ax, a long pole with a scraper at the end, or a bucket with a sharp edge. The pickers, as well as other lumbermen and forest workers, might spend days, or even months, in the woods. During that time, they made little boxes with sliding tops, often etched with a design called “gum books.” They filled the interior with chunks of spruce gum which they later gave their sweethearts at home. 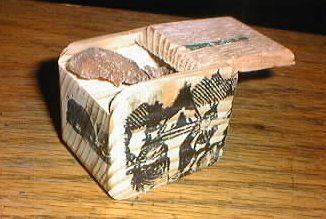 “Gum Book” made by the Naturalist today

Curtis, meanwhile, broadened his territory, breaking ground as the first Easterner to set up commercial relationships in the Wild West and as one of the first – if not, the first – sales reps in the nation. When you imagine a salesman, you likely think of train rides, circa the Music Man, with crafty salesmen huddled together in coach class, saloons with beds one floor up for the weary (and intoxicated) traveler, and skeptical townspeople who eventually became won over by the sales guy’s quick talk.

But for the first chewing gum salesman, the narrative is entirely different. First his travels predated the railroad, or, as Curtis stated: “In those early days Chicago had but one railroad and nothing but wooden sidewalks, through the cracks of which when the ground was wet the water was projected upward in streams that copiously sprinkled the passer-by.”

This usually meant he traveled by water – rivers, canals, and lakes – and by stagecoach. Here’s what Curtis was quoted as saying about the matter:

“I have passed hundreds of nights camping out on long trips, with only a blanket for a covering and the ground for a bed. We, who drummed the trade in the West then in behalf of Eastern houses, did not mind that, but we did object to the rattlesnakes sometimes. It didn’t pay to have them get too familiar. We were happy when we could travel by canal-boat or by steamboat, but the dreadful Western stages were what tried our patience. Time and again, but for the fact that my samples and baggage had to be carried, I should have preferred to walk, and would have beaten the stages under ordinary circumstances. Many times I did walk, but it was beside the stage, with a rail on my shoulder, ready to help pry the stage itself out of the mud.” 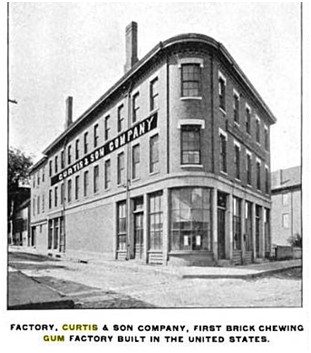 Regardless of the harsh travel conditions or, for that matter, the year it took to get paid by customers, Curtis was a stunning success. To keep up with demand, he invented a gum-making machine that enabled them to produce the gum faster and easier than by hand. In 1852, the Curtis & Son Company opened the nation’s first chewing gum factory with 200 employees producing 1800 boxes of gum a day, and the chewing gum industry was born!

Why Curtis stopped making chewing gum isn’t clear. Before he did, he experimented with flavors, such as licorice, and ingredients, including the popular paraffin wax, the parent to the wax lips kids still use today. Competitors bubbled up throughout Maine and beyond but Curtis remained king. One reason could be that Curtis’ father died in 1869, changing the nature of the business. Another could be that spruce resin, in spite of the boiling and flavoring, still had a strong taste and bitter aftertaste – with new and fanciful flavors appearing with the industrialization of food, spruce just couldn’t compete.

It’s also possible that Curtis, who went into dredging, ship-building, mining and, finally farming, was a true entrepreneurial spirit who loved the adventure of breaking ground but had no interest in staying there. And he was good at it – his many endeavors made him a very rich man and he died that way at the age of 70 in 1897.

Regardless, his legacy lived on. The machinery Curtis invented, but never patented, was used for decades afterwards. The chewing gum industry he started blossomed, and his spruce resin continued to play a part. In 1892, a baking powder salesman decided to offer spruce gum as a free gift to encourage people to buy his product. It turns out the customers were more interested in the spruce gum than the powder and the salesman switched careers. His name was William Wrigley and he went on to become the most powerful player in the gum industry anywhere.