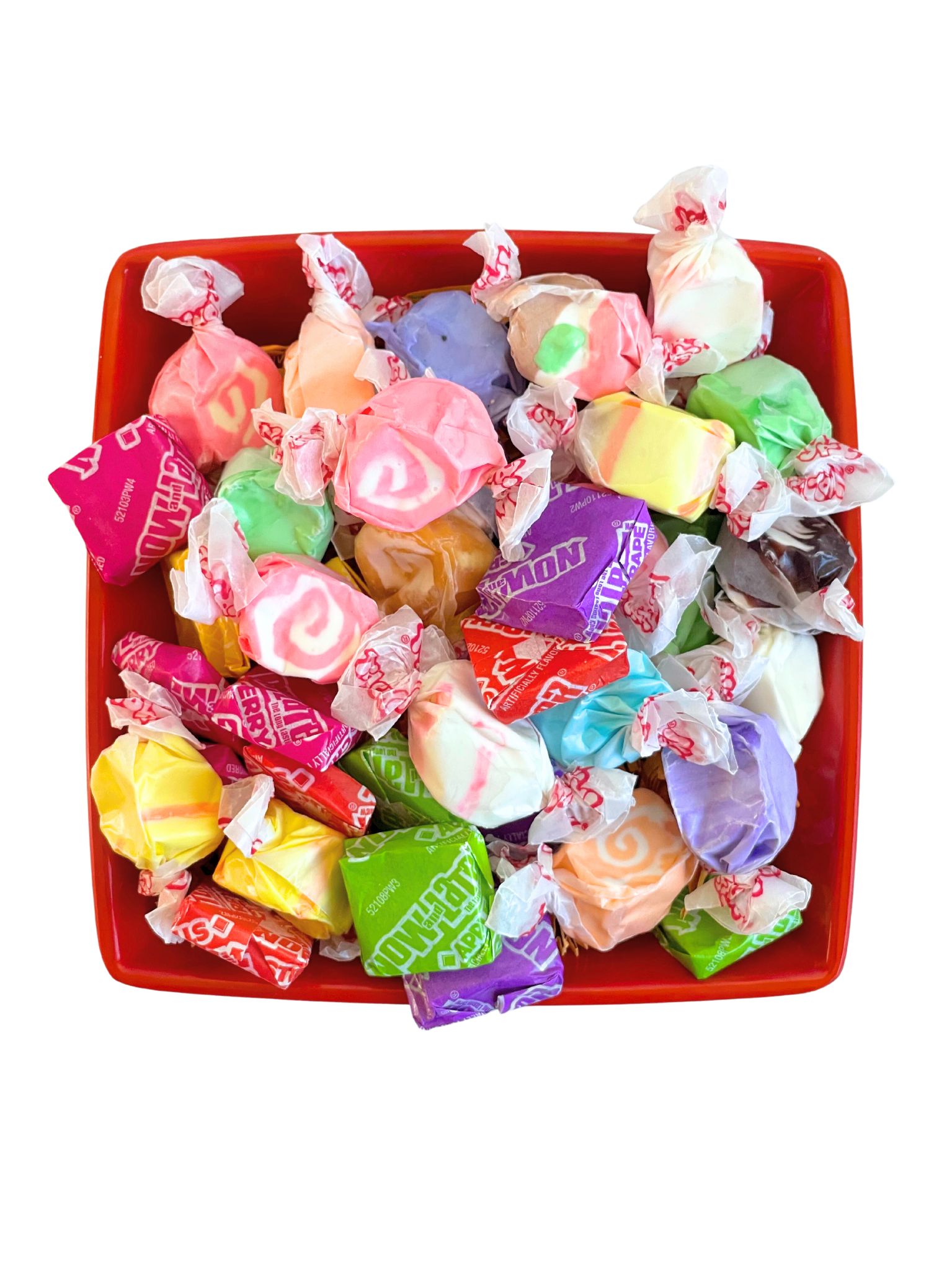 Taffy Treasures: A Mix of Taffy Favorites through Time

The sweet and sticky treat is full of bright colors, fruity or minty flavors, and, above all memories! This collection has plenty of each – same flavor you knew and loved on summer vacation no matter where you were. The blend of taffy is from the 1800s… plus a selection of 1900s favorites, too! These include Now and Later, Saltwater Taffy, Molasses Pulls and more! Contents depend on availability, of course, but is always fun and good! Comes in a recyclable 6-ounce bag.

It’s no surprise that saltwater taffy originated by the seashore… but did you know it never contained salt? Boardwalks were built a lot closer to the ocean than they are today and the shops would frequently flooded. The story goes that a little girl poked her head in a candy shop after a flood and asked for taffy. The shopkeeper replied they only had “saltwater taffy” and the name stuck!

So, what distinguishes “taffy” from saltwater taffy?

What distinguishes “taffy” from saltwater taffy?  Actually, nothing. All taffy is made with water, corn syrup, sugar, flavoring and a stabilizer such as corn starch or gelatin  And, of utmost importance these days, food color to give it that festive zing.

When was taffy invented?

The saltwater taffy, and the widespread popularity of taffy, began in Atlantic City in the 1880s. In terms of its place in candy lineage, taffy arrived when “candy” was no longer considered a medicine: the taffy was all about taste, texture and fun. Especially fun. The eating aspect was one thing, but taffy was sold in fun places as well, namely the seaside, where it got its non-controversial yet inaccurate name.

In those days the shops were built a few steps away from the sea, where logic would tell you they’d be prone to floods and every bit of wrath brought by storms. The most influential taffy makers at the time were John Ross Edmiston, Joseph Fralinger, and Enoch James.

There are many variations on what happened next but consensuses leans toward this rendition: One dark and stormy night, a storm swept up from the sea, flooding a number of stores, including John Ross Edmiston’s. As Edmiston was cleaning up, a little girl stopped by looking for candy. Looking at the mess, he said he only had “salt water” taffy. Marketing, at that time, was reaching new heights, and the snappier the all-important name, aka brand, the better. Edminston liked the sound of salt water, so expressive of the sea, but not the salty additive. So he called his taffy saltwater taffy but, like other taffy makers, used sea salt in name only.

What Became of Fralinger and James?

Fralinger, who was a glassblower, fish merchant and bricklayer before buying a concession stand on the boardwalk. In 1884, he took over an existing taffy stand and soon added his own selections, starting with the molasses pull in 1885. Eventually Fralinger became known as the Salt Water King, an active marketer who brought the popularity of saltwater taffy to the beach.

Enoch James had been making taffy in the Midwest before moving to Atlantic City in 1880. Once there, he set up his own taffy shop and developed two innovations that made slat water taffy what it is today. One is the bite size pieces that fit into your mouth without any half-eaten bits, sticky and a remarkable magnate for sand. He also invented satchel for the taffy that you still see today, one part souvenir and one part container.

Fralinger and James remained competitors well into the 20th century when they were purchased by the Glasser family, a fifth-generation candy company who, by default, united both of them today. But were these guys actually selling “saltwater taffy”? And I do mean the salt-less saltwater taffy. Edminston said “no”: the name was his. The Federal Government agreed, giving him a trademark for the name in the early 1920s, but his competitors fought back. In the U.S. Supreme Court took their side, making saltwater taffy available for one and all.

What is the difference between toffee and taffy?

Toffee originated in England, and shares most of the same ingredients as taffy, but is made with a different process. Taffy is usually pulled on a machine that stretches the batter than cuts and wraps it.

What’s in Our Taffy Treasures Collection?

It’s still the same flavor you knew and loved on summer vacation no matter where you were. A blend of different taffy from the 1800s… plus a selection of 1900s favorites, too! As for the taffy – Now and Later, Saltwater Taffy, Molasses Pulls and more! Contents depend on availability, of course, but is always fun and good! Comes in a recyclable 6-ounce bag.