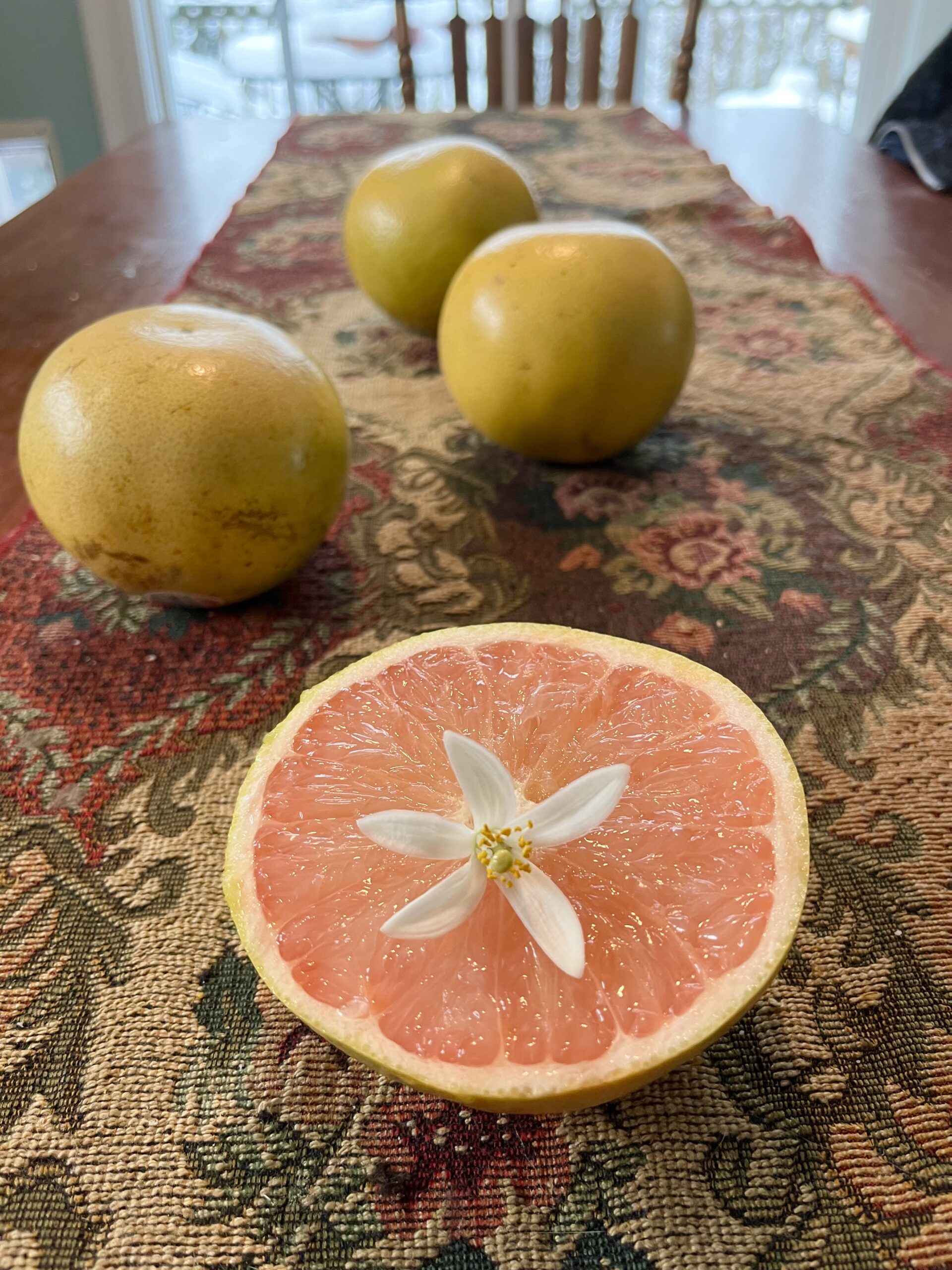 People, Raise Your Spoons: It’s Time to Bring the Grapefruit Back

Cookbooks People, Raise Your Spoons: It’s Time to Bring the Grapefruit Back

People, Raise Your Spoons: It’s Time to Bring the Grapefruit Back

Let’s talk about grapefruit. These days, who cares about grapefruit? In the mid-1970s, it was a huge hit. One of the most popular fruits around. Then, sales plummeted by 70%, never to recover. Never meaning NOT YET! So, let’s bring the grapefruit back! As Americans, it’s our duty. And if you’re not American? Care about it, anyway. In celebrating, loving, and eating grapefruit, you’re opening the door to a universe of new taste sensations, enjoyed in a day when dinner parties were a social requirement; meals started with an appetizer; and grapefruit-recipes were more than all the rage… they were a proclamation of culinary innovation and good taste.

Besides, grapefruits are eclectic. They make a great dessert, are perfect in salad, are a must in certain cocktails, have high health value, what with all the Vitamin C, and had jaw-dropping medicinal attributes when they rose to significance in the late 1800s. These attributes, I should add, have been ignored by modern science but, they’ve been so ignored, they’ve never been disproven. Modern science does give us a few warnings about grapefruit, however, especially when it interacts with modern drugs. Don’t worry. More about that to come.

Question: Where did grapefruit originate? Answer: Hummmm…Like all things, grapefruit, the answer is shrouded in mystery. Here’s what we know. All citrus plants evolved in Asia. Except grapefruit. That was spawned in the Caribbean, most likely Barbados, as recorded in 1664 by a Dutch physician visiting Barbados, or possibly in Jamaica, as witnessed by one Patrick Browne in 1789. Were these trees actually the grapefruit? Yes, they were or maybe they were, and possibly they morphed into today’s grapefruit.

The mystery hinges on the fact that grapefruit, while neatly presented in grocery shelves, is a wild plant at heart. It spread, was ignored, cut down, and possibly disparaged in the Caribbean where it originated. Certainly other citrus plants were growing on the islands at that time…which makes the grapefruit’s origin story even harder to define. Citrus plants cross-pollenate easily and it’s likely that untold varieties appeared and vanished over the centuries. And one of them was the grapefruit.

That said, here are a few facts to give you comfort: Grapefruits, like most citruses, developed from a single plant that grew five, maybe 6 million years ago in today’s Asia. The earliest citrus broke into numerous other citruses. Three of them compose the DNA of today’s citrus favorites: citrons, a lumpy, lemon-looking fruit; mandarins, the sweet (literally) orange-ish fruit most Americans usually buy in tins; and the pomelo, that overgrown grapefruit-looking specimen we see in markets and believe is an off-shoot of the grapefruit, not the parent. We have the pomelo to thank for the bitterness in citrus fruits today.

Eventually explorers, among them botanists, brought citrus plants to the warm, humid soils of the Caribbean where they ran wild and somehow spawned the grapefruit we know today. Or, they were scientifically developed. See – it’s a mystery.

Why the Name? Grapefruit?

Why “grapefruit?” It seems the name could come from two places: The taste which early explorers thought tasted like a grape. As it happens, that was in the Caribbean where, at the time grapes did not grow. Another possibility: baby grapefruit grows in clusters much like grapes. Ok – either possibility merits speculation. A previous name, which makes even less sense, is the “Forbidden Fruit” and, early on, the “shaddock,” possibly for Captain Philip Chaddock, who may or may not have introduced the pomelo to the Caribbean. The problem is “shaddock” was, in fact, also the name of the pomelo.

Grapefruit in the US: The Ascension of a WILD Fruit Tree

You will not be surprised to know that no one knows exactly how the grapefruit wound up in the U.S. It seems a Frenchman brought the first grapefruit to Florida in 1823, where an American transplant to Florida planted the seeds and established the first grapefruit nursery in 1870. In 1892, Kimball Chase Atwood, a successful insurance guy from Maine, bought 265 acres of forest, burned it down, and planted 16,000 grapefruit trees. Meanwhile, groves sprouted up in Texas and Arizona where they are cultivated today.

The U.S. is now the #2 grower of grapefruit in the world (China is #1) and the largest consumer of the mysterious fruit. But its standing is nothing like it was in the mid-1900s!

Grapefruit in the US: The Glory Days

Grapefruit lurched into popularity in the early 1900s, became the most decadent and multi-faceted fruit around, reached a crescendo in the 1970s, (helped in part by the “grapefruit diet” a wonder of modern marketing if nothing else) and suddenly went downhill. But why? That question to be discussed.

Throughout the first half of the 1900s, grapefruit was enjoyed as a breakfast food, a dessert, an appetizer, and a drink mix. But its presence was more – so much more. I remember visits to my grandmother in her rented apartment in Brookline, Mass, just outside of Boston. This was in the 1960s and early ‘70s. Before the meal she served an appetizer of a grapefruit half. But NOT any grapefruit half! It was neatly segmented with a grapefruit cutter, the individual pieces rising from the shell, and sprinkled deliciously with sugar. My Nana, who lived in a good-sized house with plenty of gold picture frames and a sunken living room, served the same, although hers was on a bed of lettuce. I later found a version at a she-she restaurant in Brooklyn – the sugar on top burnt a la crème brulee, served in a shapely bowl and costing well over $10.00.

But even that doesn’t rival the originals. The renowned Boston Cooking School Cookbook, written by the renowned Fannie Merritt Farmer, offers us this for broiled or baked grapefruit in the 1941 edition: Put one tablespoon brown sugar, and, if desired one tablespoon of French dressing or, (as commonly suggested in other recipes) one tablespoon or sherry or brandy in each half. Bake or broil and serve as a first course or dessert.

Then there’s the Grapefruit a la Russe: Wipe three grapefruits, cut in halves crosswise, and remove seeds and tough portions. Sprinkle with granulated sugar and chill in refrigerator. Beat 1 cup of heavy cream until stiff and add two tablespoons of powdered sugar, a few grains of salt, and ½ a teaspoon of maraschino. Make a border of the cream (using a pastry bag and tube) on top of each half in the form of a square. Garnish at each corner with a glace or maraschino cherry. Serve in double cocktail glasses, having the larger ones filled with crushed ice. Makes 16.

See what I mean? Grapefruit is way more complex than one would imagine. But wait until you see what’s in the Gold Cookbook (1947). Master Chef Louis P. DeGouy recommends four grapefruit recipes – the Grapefruit Rainbow alone takes a page to describe. The Grapefruit Aspic Annette is shorter, albeit complicated. Even the name is hard to pronounce. Here’s what he recommends:

“Soak 2 tablespoons of granulated gelatin in ½ cup cold grapefruit juice and dissolve in 2 cups of grapefruit juice that has been heated to boiling point. Decorate the bottom with an oiled straight mold (oir individual ones) with sections of grapefruit from which all the white membranes have been carefully removed; cut each section in tow crosswise. Pour in gently enough of the cooled gelatin mixture barely to cover the grapefruit. Chill and arrange another layer of the grapefruit sections. Repeat with the gelatin mixture barely to cover; let set and cover with a thin layer (about 1 inch) of peeled, cored, cubed apples. Cover with more gelatin then let set, then fill entirely with grapefruit sections. Pour into gelatin mixture to completely fill the mold and place in the refrigerator to set. Unmold on a large, chilled platter on a bed of crisp, young watercress, dipped in French dressing and thoroughly shake. Decorate with small designs of mayonnaise forced through a pastry bag, using a small, fancy tube. Serve at once.”

Author’s note: Exhausted? Once finished, make this refreshing grapefruit drink from 1912, and you’ll recover – being sure to keep the last ingredient! 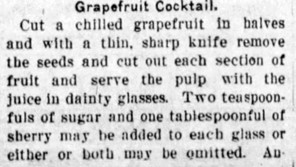 Or how about this recipe from 1945 – VERY Fancy, VERY Post – Prohibition. Reminds me of a Bloody Mary…only better (if that’s possible):

The Current End of the Grapefruit Craze

Why has the grapefruit craze ended? Like everything else, the answer is somewhat of a mystery. A Washington Post article (2015) tells us that in 1976, grapefruit was among the most popular fruits in the U.S. with the average American eating about 25 pounds of grapefruit a year. Today, that number has dropped 70%. Add in grapefruit processed for such things as juice, the number nose-dives to almost 80 percent.

One reason may be related to health. Grapefruit can trigger negative reactions to certain drugs such as Nifediac, which lowers blood pressure, Buspar, used for anxiety, and Allegra, an antihistamine. Still lots of people need to avoid lots of foods. For example, peanuts can create a deadly toxic reaction in some people, but they remain popular in everything from candy bars to Thai food.

Unlike peanuts, grapefruit was thought to have near miraculous health benefits. An article in the Monroe Journal of 1896 sings the grapefruit’s praises while adding to the confusion. They say: “The grape-fruit or shaddock, so called for its discoverer Lieutenant Shaddock, – or to mention its soft Chinese name – pumelo… is highly prized by those who live in malarial localities.” They add: “…if you are of a bilious temperament eat grapefruit… if fevers threaten, eat grapefruit.” Grapefruit vs grape-fruit, Lieutenant Shaddock vs Captain Philip Chaddock, Pumelo VS Pomelo and Pomelo as Grapefruit vs Pomelo as part of grapefruit and. Who cares? The health benefits (or not) are the same.

Perhaps the problem lies in the juice aisle. People are drinking less juice, which contains a high quantity of sugar, and have more juice choices. As a kid growing up in the ‘60s, I never thought of drinking pomegranate juice. I don’t believe I even knew what a pomegranate was. Today, we have organic and sugar-free pomegranate juice, pomegranate-grape juice, and pomegranate juice cocktail. How can grapefruit compete?

Besides, trends in food are an inexplicable and ever-shifting phenomena. People rarely smoke cigars. Eat hardly any Jell-O. And consider the Waldorf salad a retro picnic product. Marshmallow salads with mandarin oranges and coconut? Oh, please. But for us at true Treats the grapefruit is distinct. It was served by legends of mothers and grandmothers for untold years. It is relatively inexpensive and people from high-fashion New Yorkers to farm families in the mid-West have loved and required it. Plus – the possibilities of grapefruit are boundless!

Let’s roll out the mystery and get our grapefruit spoons at the ready. We’re bringing grapefruit back!