An Evening With Virginia Willis

Eating Out An Evening With Virginia Willis

Recently, I attended an event in DC featuring the food of Virginia Willis, a Southern chef and food writer whose newest book “Secrets of the Southern Table: A Food Lover’s Tour of the Global South” (Houghton Mifflin Harcourt, 2018) was just released.

Note the words in the subtitle: “Global South.” Among her interesting (and often hilarious) insights throughout the evening, Willis point out that “Southern” food is relative depending on where in the South it originated and the cultural heritage that influenced it.  We were treated to sweet potatoes and collards from Africa (the collards had a vegetarian twist: Italy-based Parmesan cheese rinds replaced the traditional ham hocks or smoked turkey); Asian-American green beans with ginger; and European American “Cat’s Head” biscuits, a course unto themselves, whose name Willis recalled her grandfather using as the rich, tasty biscuits are roughly the size of a cat’s head.

Willis’ narrative throughout the meal kept returning to her broader reality: Southern food exists because of the merger of various cultures: African, primarily brought on ships carrying enslaved labor starting in the early 1700s; European (did you know more Italians lived in  Louisiana during the late 19th century than in New York); Asian, many of whom arrived in North America as underpaid laborers starting in the 19th centuries; and Latinos, whose influence dates back to the 17th century – quite possibly earlier.  Jews, many fleeing the Inquisition, ended up in the South as well, and now live, as Willis mentioned, in her home state of Georgia.

The origin of Southern food can apply to most foods world over: humans are curious, migratory beings who brought their food ways with them. Many of their stories involved unfathomable horrors that haunt us today:  the ravishes of the sugar cane and spice trades, for example, and the hundreds of years of the Inquisition where food was used as evidence to justify the torture and burning of men, women and children at the stake.

Yet, as Willis said, sharing bread or the regional equivalent has long brought us together, as it did that night. Her lesson is a good one: may we know and appreciate each other as we enjoy the many cultures and food ways that fill our plates.

For more on Virginia Willis: www.virginiawillis.com 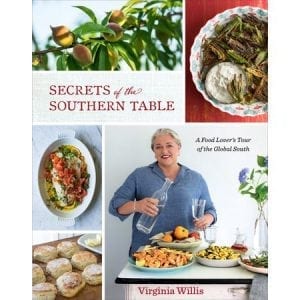