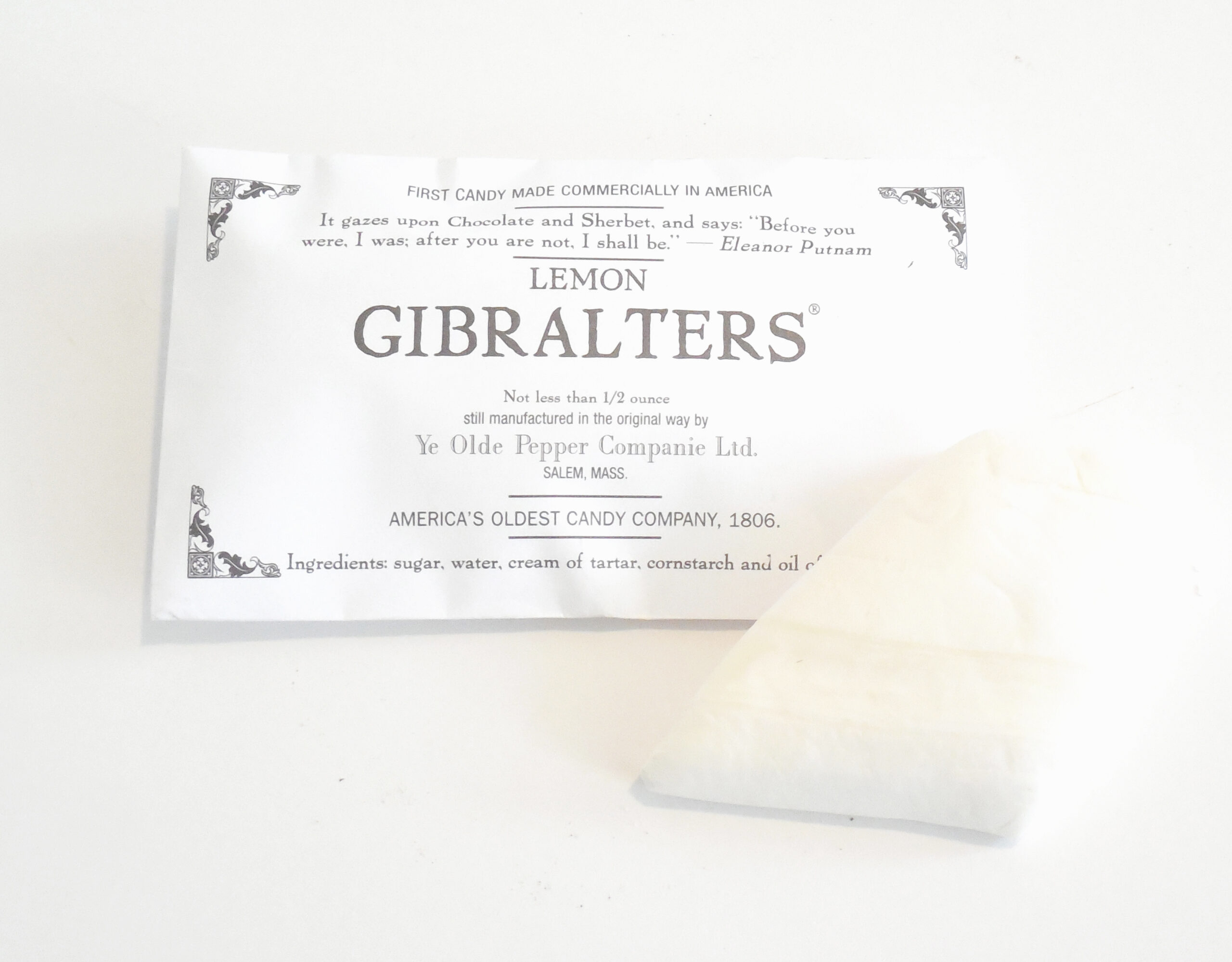 The fascinating and revealing story of the nation’s first candy begins in 1800 when Mrs. Mary Spencer and her son Thomas were shipwrecked in Salem, Massachusetts, after sailing over from England. As you can imagine, Mary Spencer was destitute, having lost everything she owned in the wreck. The town’s women felt bad for her, and learning she was an excellent cook, raised money to buy her a barrel of sugar.  Cane sugar was expensive at that time, and women didn’t have the means to make money. It’s likely they had to raise the funds through church functions and other means.

With the sugar, Mary Spencer made what she called the “Gibraltar,” the British name for a family of confections. The ingredients—cream of tartar, sugar, lemon or peppermint flavoring, and corn starch—were standard in many sweets and medicines, and similar to an after-dinner mint. She sold the candy from a pail on the steps of the First Church in Salem.

It’s important to remember that at that time women couldn’t vote, rarely owned property, and certainly weren’t entrepreneurs. Regardless, Mary Spencer took the money from her candy and bought a horse and buggy which she used to travel from town to town selling the Gibraltar. She was so successful that, in 1806, she bought a house on Buffum Street in Salem. She lived on the second floor of the house and opened the first candy store on the ground floor. There she sold the nation’s first commercial candy – the Gibralter.

Mrs. Spencer’s success was partly due to her shop’s seaside location and the steady flow of seafaring customers: in war time, sailors and seamen; in peacetime, seamen, traders, merchants, and pirates. The Gibraltar was sturdy enough to withstand humidity from the sea and was cut and wrapped in triangular pieces that easily fit in small spaces on board, where it was carried to China, the Far East, Africa, and the East Indies. But something else was at hand.

As Mary Spencer went from town to town selling the nation’s first commercial candy, she secretly transported escaped slaves who hid in a false bottom beneath her seat. As for her son Thomas: he was a soap box abolitionist, who challenged passers-by to join the resistance movement.

When Mary Spencer died around 1828, Thomas put her body in an easily transportable cooper coffin. After running the company for a few years, he returned to England, where a large sum of money and possibly a title, awaited him. He buried his mother there. George Pepper bought the business from Thomas Spencer and his employee, George Berkinshaw, bought it from him. The Berkinshaw family still owns it today. As for the buggy: it’s housed in the Peabody Essex Museum.

“Jonathan Walker, a sea captain from Maine, was caught transporting escaped slaves to freedom in the Bahamas. He was arrested, imprisoned and branded with the letter “S.S.” on his hand which stood for slave stealer.”