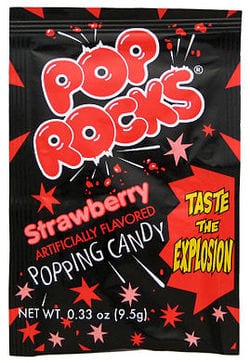 There is nothing on earth quite like the out-of-this-world fizz of Pop Rocks. Whether a small amount on the tip of your tongue or a big burst in your mouth, the texture, the flavor, and the experience is unique. This dynamic candy was developed by two chemists at General Foods in the 1960s – William A. Mitchell and Leon T. Kremzner.

Pop Rocks didn’t hit the market until the 1970s. A space age favorite alongside other classics like Astro Pops, satellite wafers, and fizzy, sour Zotz. Despite that persistent legend, Pop Rocks will not explode in your stomach with a swig of cola and just about everyone agrees it’s fun, nostalgic and absolutely harmless.