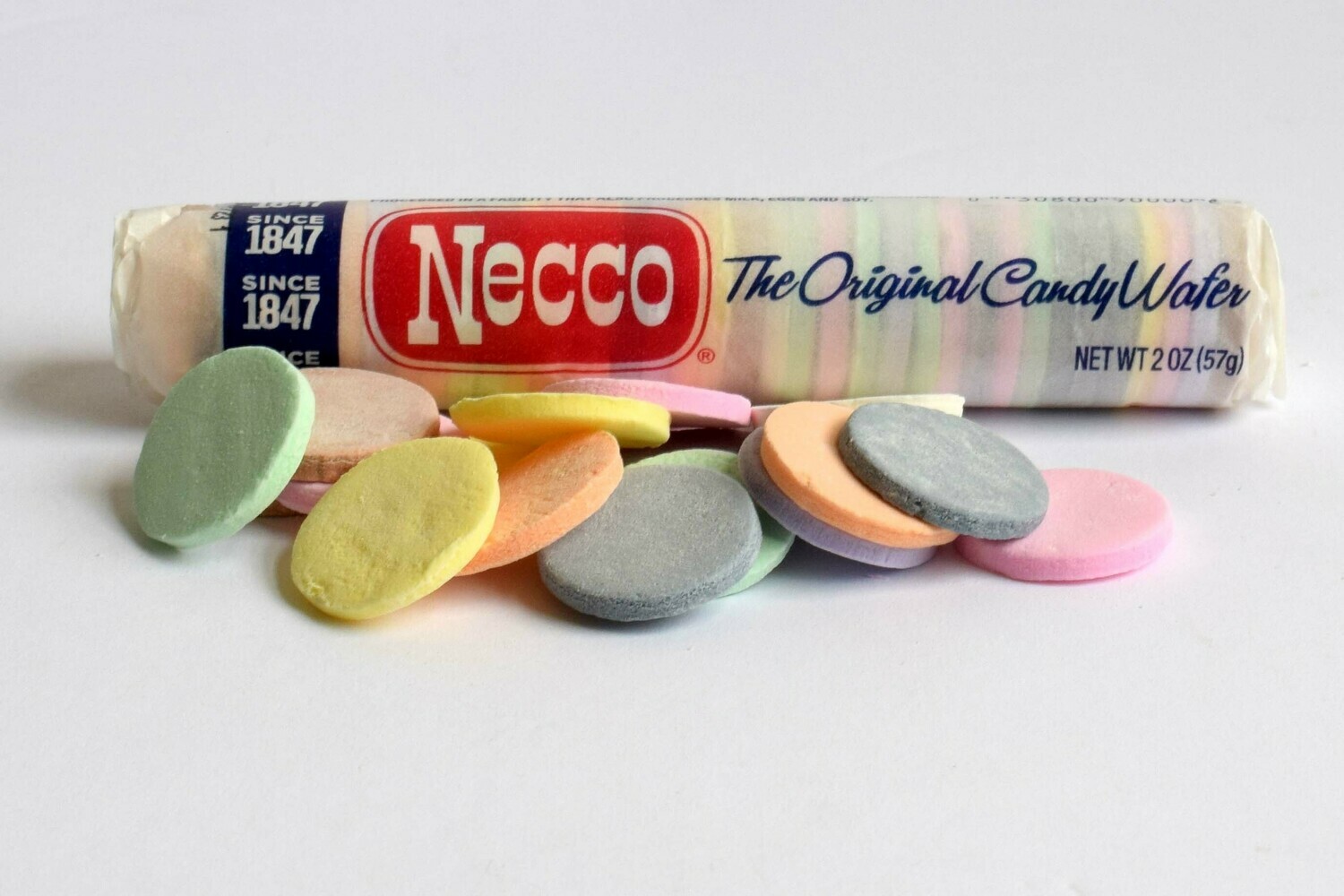 The Necco Wafer – a truly unique flavor and texture. Some call it chalky. Others say it’s creamy. With licorice, lemon, lime, orange, clove, cinnamon, chocolate, and wintergreen flavors, the Necco Wafer is a truly traditional candy. Enjoyed since 1847, the NECCO redefines retro.  As for the history of the Necco? Fascinating!

You may love Necco Wafers (as I do) or not like them at all…depending on your taste and memory of when you ate them. As for me – I once lived near the Necco factory in Cambridge Massachusetts and would knock on the door of the factory on an occasional Thursday.  That was the day when the company store was open to workers, and a woman, maybe a manager, would open the door and give me some samples. I always offered to pay, and she always brushed me away. But why the side door? Why not go to my local pharmacy, candy store, or so many other spots and buy some there? BECAUSE: Tropical! My favorite Necco Wafers were the hard-to-find tropical varieties but at home base the rolls were a’plenty. Not that the other flavors weren’t good enough. They certainly were!

Love them or not, one thing is TRUE: Necco Wafers were an early candy, a true first footprint on the path to Retro candy and the story is amazing…starting with OLIVER CHASE!

Who invented the Necco Wafer?

Retro candy was invented, more or less, in apothecaries where sugar reigned as a flavoring and curative. Some were actual pharmacies – some, shall we say, were sketchy. So, it makes sense that Oliver Chase, a genuine pharmacist, would be among the first to create what would be an early classic. Chase had immigrated from England in the 1840s and set up an apothecary in Boston with his brothers Silas and Daniel. He was making “soft paste,” lozenges consisting of sugar, gum Arabic, a flavoring and possibly gelatin.

As a medicine, Chase, like other pharmacists, mixed in some arcane ingredients and classics such as peppermint or ginger for stomach problems, rhubarb for constipation, ginger for nausea, and opium for just about everything else. Making the lozenges was tedious, exact work: according to Scientific American of 1868, the “plastic” sugar was rolled into a sheet then cut, lozenge after lozenge, like crackers from dough. The batter was temperamental, it had to be just the right consistency, measured and pressed to make close-to-exact doses, with as little handling as possible.

As a candy, Chase replaced the bad tasting ingredients with tasty flavorings that would appeal to grown-ups and kids alike. The ingredients are pretty much the same as stick candy or Turkish delight, but the texture is both smooth and chalky. Customers report they used Neccos as a practice communion wafer and their grandmothers used them as a sugary sedative to keep the grandchildren quiet at church.

Chase’s lozenges were exceptionally popular which created a problem. The production process was so slow he got further and further behind the orders. So, in 1847, Oliver Chase developed a lozenge cutting machine where he cranked dough onto plates with lozenge-size indentations. The lozenges tumbled out in uniform sizes as quickly as his hand could turn.

Chase called the result the “Chase Lozenge” or “Hub wafer” – one with a glazed and the other with a transparent wrapper. “Hub”, by the way, was a nickname for “Boston”.  Later, the confection was called the NECCO wafer. For the first time, candy-makers could quickly produce consistent pieces and medicine-makers create predictable doses. Chase’s machine was revolutionary.

What Other Candies Were People Eating When Chase Created the Necco Wafer?

Grown-ups and kids were eating other candies, but few survive today. One was Turkish delight also called Turkish “paste,” which actually resemble fruit squares and an invention from around 1805 – the Gum Drop. Others include the Gibralter, made in the nation’s first commercial candy company in 1806; pulled creams, which evolved in the mid-1800s; hand-pulled sticks which go back who-knows-how long… probably 1600s; and sugar plums, a broad range of candies with a tiny nuts or seeds surrounded with sugar such as Cream Filberts (late 1700s) and sugared or Jordan Almonds (ancient Romans).

What distinguished Chase was his use of machinery to make the candy, so it was every-ready to enjoy. It still is today – adored by many, especially me.