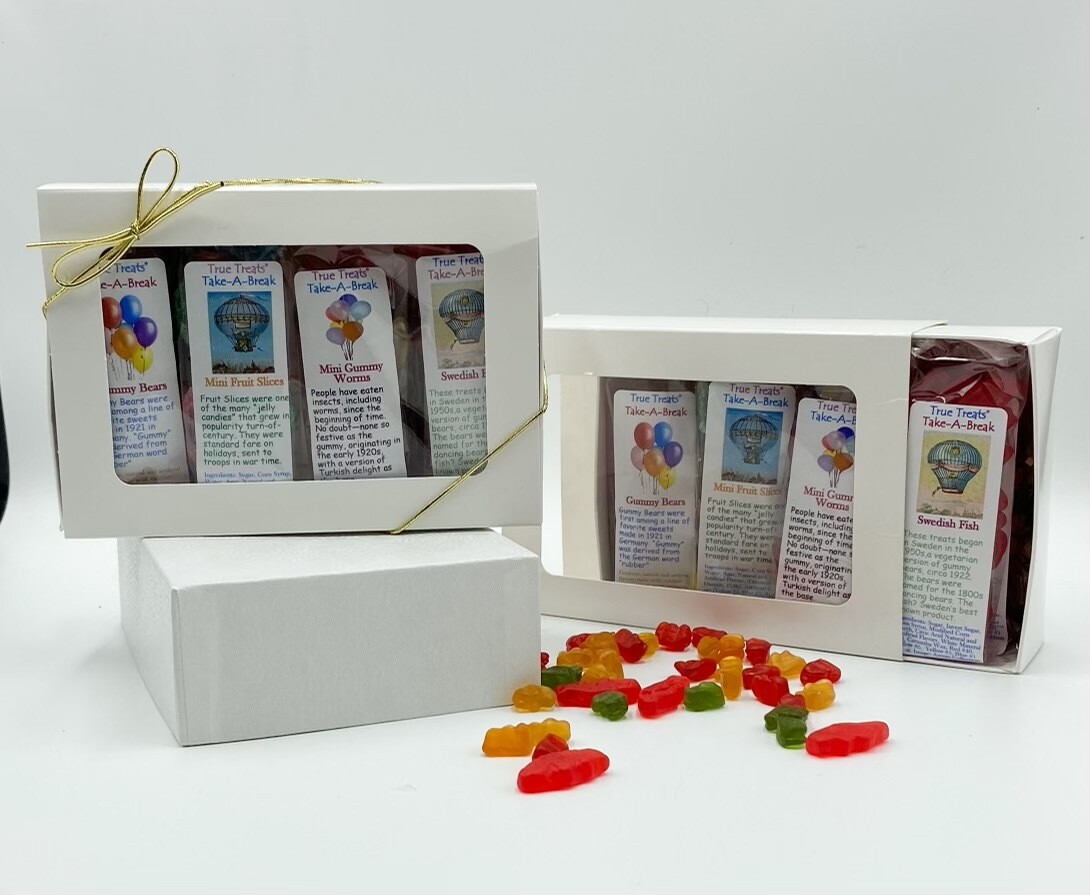 Take A Break with Gummy Candies!

For the true gummy lover! A selection of gummy candies from the 1920s through the 1970s… still popular today. Eight bags in a slide-open box. Perfect for lunches, snacks at the office, car trips, or hikes!

Modern gummy candies all trace their origins to Turkish Delight – first sold as a sore throat remedy in 9th century Arabic apothecaries. Hundreds of years later in the 1920s, a German candy-maker created delight-based little bears called “rubber candy.” The German word for “rubber” is – yes! – “gummy.” Plenty of other candy-makers jumped in, making their own version of gummy candies. The first modern vegan gummy candy was made in Sweden in the 1970s – Swedish Fish!

The History of Gummy Candy

We know you have lots of questions about gummy candy – one of the most popular retro candies, with a truly old-time candy history. FAR OLDER than what most people think. So, here goes… (Susan provided some of the information that follows to Smithsonian Magazine, for a recent article. You may have seen it there!)

When were gummy candies invented?

Gummy bears were the first “gummy” candy, made in 1922 in Germany. BUT – the basis of the gummy bears goes back much further than that. Gummy bears, and all gummy based candy, likely started with Turkish delight – first sold around 900 CE as a medicine in the Arabic apothecaries. In the 1700s, a Turkish sultan fell in love with the sweet and word traveled around the world where it was widely enjoyed.  Why was Turkish delight a medicine?  One important reason: it contained sugar, seen then, as now, to ease sore throats. The original Turkish delight did not contain gelatin, unlike the gummy candy of today. People love the Turkish delight for the same reasons they love gummy candy – a smooth texture and sweet flavor, fruity flavor.

The selection of shapes and sizes has varied wildly, as well, creating a remarkable range of choices.   Best idea – try them all. We have gummy sharks, gummy eggs, gummy army soldiers, gummy frogs…and a vegan variety made in Sweden – Swedish Fish.  You never know what’s ahead!