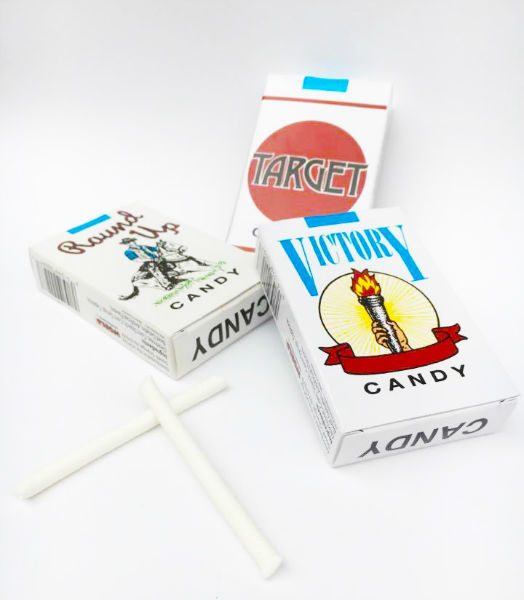 The Story of Candy Cigarettes:  Loved, Loathed, and Lots of Fun

The History of Candy Cigarettes:  Loved, Loathed, and Lots of Fun 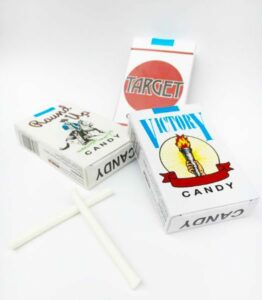 Americans have been enjoying candy cigarettes since the late 1890s when they started as chocolate cigarettes, then the candy cigarettes you see here, then, decades later, bubble gum cigarettes. Other flavors included licorice! These candy cigarettes are thin and white and once had a red spot on the end, signifying the lit end of a cigarette. Today, the red spot is gone, and the candy cigarette now looks like what we once called a “non-filter cigarette” (I remember Camel’s best) or the skinnier hand-rolled variety. As for the taste? They are variously described as “crunchy,” “sugary” and “chalky.” But people love them! Of all our best-selling retro candies, candy cigarettes are indeed at the top. 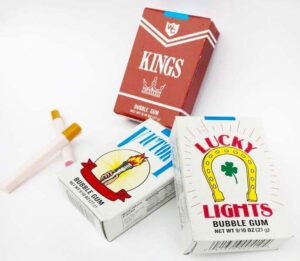 Why do we LOVE candy cigarettes?

Why do we love candy cigarettes? Why do they have such a unique part in our memories, if not our palette? Maybe because they are so daring. So nervy. So delightfully… wrong. They were sold by the “ice cream man”, at penny candy store, and liquor stores who once carried an array of candies for kids while their parents shopped for more adult products a few aisles away. Candy cigarettes were also sold at pharmacies, along with an array of other candies. Surprised? Don’t be. Candies originated in apothecaries where sugar, the primary ingredient, was also an important medicine.  Kids loved candy cigarettes, parents feared them, and the FDA took measures to ban them even before there was an FDA.

Protests against candy cigarettes started in the second launch of the candy industry. I say second, because the candy of today took off in the 1840s with such marvels as NECCO Wafers, gumdrops, and pulled creams. All things candy shut down in the Civil War and didn’t return until a decade or so later. As before, candy was marketed to kids – inexpensive and fun. Many of them reflected the lifestyle of grown-ups, both good and bad, such as pretend whiskey bottles, toy glass guns loaded with candy “bullets,” and, of course, candy cigarettes.

While many anti-candy activists cited the artificial or otherwise unsavory ingredients in candy, their objection to candy cigarettes was different. They wouldn’t kill you, exactly, but they would ruin your life. One of them, Reverend James E. Smith, declared in 1902, “These candies may look harmless, but they are leading the minds of our boys toward temptation, they are enticing our children to become drunks and cigarette fiends.” The Reverend was far from alone in his crusade. Among the many followers, he praised one cohort, Miss Lucy Page Gaston, aka “The cigarette smasher.”

More to the point, candy cigarettes, like other candies, were considered a gateway drug of sorts…with a most bizarre twist of logic. The Ladies Home Journal of 1906, for example, explained, “The first craving from ill feeding [of candy] calls for sugar; later for salt; then tea, coffee; then tobacco; then such fermented beverages as wine and beer; and lastly alcohol.” So, by that reasoning, candy is a gateway to…salt? 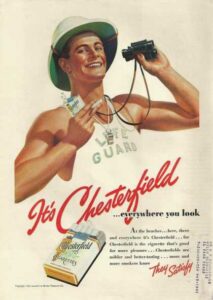 The problem went beyond eating candy to the very act of buying candy. This power of the purchase could lead children to feelings of independence and self-absurdness. And that could get them to believe they were adults, and start acting like adults, which inevitably led to drinking, gambling, and, yes, smoking. Working-class children (aka urchins, lower class, etc.) were most vulnerable as they lacked discipline and the principled background of their wealthier counterparts, so it was said.

But what of the actual candy cigarette/cigarette connection? It seems some old timers did believe candy cigarettes might, indeed, lead to smoking, as today’s pundits suggest. But cigarettes good? Or cigarettes bad? The opinions in the adult world varied. Some, with the likely help of marketers, believed cigarettes were sexy. This view went on for decades, as yours truly, a 3-pack a day teenage smoker, was convinced.

Others believed that cigarettes were healthy. Not harmless. And not  “not that bad.” Healthy. Soldiers in World War II even received cigarettes to clean their lungs.

For others, cigarettes were no mere nicotine addiction. According to one article published in 1890: “…You know the real cigarette would keep him from growing up into a strong and healthy boy; it would steal his red cheeks from him; would take away his power to learn rapidly; would care less for good and beautiful things…”

The article then brings home the most sobering testimonial against candy cigarettes imaginable – the Bible. “The Bible tell us we must ‘abstain from all appearances of evil’ – anything that looks like evil…Would this not be a good place to practice what that verse teaches us?”

Candy cigarettes were indeed banned in the U.S. in 2009 under the FDA’s Family Smoking Prevention and Control Act. The debate behind the FDA’s most recent, albeit erstwhile, decision was based on studies showing that candy cigarettes led to cigarette smoking. Candy cigarette fans, researchers among them, disagreed. Behaviors were set by role models, especially peers, and candy cigarettes on their own may have been seen as grown-up behavior but were essentially fun and, by the way, harmless. Fortunately, the ban was but a pause in candy cigarette production although the little red spot at the end of candy cigarettes has vanished. The almost-real paper filter on the chocolate and bubble gum cigarettes remains the same. Today, candy cigarettes have a place on candy shelves where they remained delighting and infuriating for over a century since their creation.

True Treats happily and guiltlessly carries all three kinds of the very non-tobacco cigarettes of the past – chocolate, candy, and bubblegum, each with their own packaging, flavors, and textures… all in cigarette pack containers.

Check out this video from Candy Historian Susan Benjamin about Candy Cigarettes!