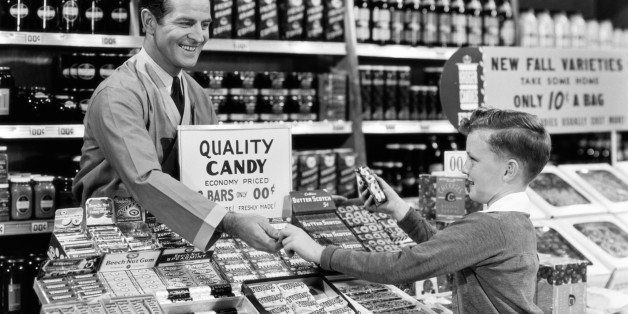 Known as “retro” candy, “old time candy” or “vintage” candy, the assortment of 20th century candy is as dynamic and surprising as the century itself. Think about it – the 20th century started with horse-drawn carriages and ended with rockets in space. The Industrial Revolution became just industry and air travel became an everyday event! Give the gift of the retro period with dynamic and FUN candy from Zotz to Boston Baked Beans. Comes with 12 samples, plus a keepsake tag with an authentic retro image on the front and the stories on the back.

The History of Retro Candy

Fun times, fun places, and fun candy go together and have since the mid-1800s to make what we now call Retro candy. Their purpose were for fun and their audience were grown-ups and kids, depending on the type. They were tasty, fun, and affordable – available to everyone who wanted them for only a penny – or even less – a piece.

What were some of the earliest Retro Candies?

Made in apothecaries and derived from medicines (yes, medicines!) some of the earliest were hard candies such as stain glass, usually made at home. These transitioned into memory-packed sour balls, strawberry-filled candies, and butterscotch, which doubled as a way to freshen the breath, sooth scratchy throats, and polish off a delicious meal. They were also standard fare in grandmothers’ purses for generations. Today, they’re  perfect for car rides during vacation, office candy bowls, and a bit of refreshment to enjoy during the day – no matter where you are.

When were gummy candies made?

Gummy candy is without a doubt a favorite from birthday parties to snacks. The first iteration was actually Turkish delight (a medicine for sore throat around 900 CE) that morphed into  gum drops (1805) then jelly beans in the 1860s, and ended up as gummy bears in Germany, in 1922.  Other variations have appeared, from colas to sharks and countless more. All about fun!

When did people start eating candy at movies?

Among the most wonderful and varied displays of candies was at the MOVIES! During the Depression, movie theater owners realized they could recoup some of the losses due to the economy by selling popcorn, then other treats such as chocolate covered raisins, bridge mix (also used for card games) Snow Caps, Mike n’ Ikes, and many more!  Tickets and concession prices were low enough so they knew sales were likely to happen, and they did. Today, much of the “movie theater” candy is enjoyed at home. The same fun, flavor, and memories as before.

What about caramels, bubble gum and other favorites?

Many of  these candies originated in the late 1800s but came into their own in the early 1900s. Bubble gum is one example – it started as chewing gum made with tree resin (some still are today) and became bubblegum in the 1920s. Marshmallows appeared with the rise of instant gelatin in the late 1800s and morphed into circus peanuts and other iterations, including Lucky Charms. As for caramels – a late 1800s treat based on the French praline.