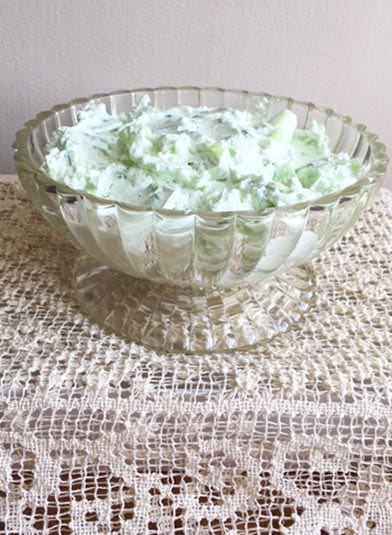 The Mystery of Watergate (Salad)

Puddings The Mystery of Watergate (Salad)

What on earth is Watergate salad? Who invented it? Why? And why call it Watergate? These questions are circulating around DC these days, and I was fortunate enough to be invited to WAMU, DC’s Public Radio affiliate to weigh in on the matter.

So, allow me: Watergate is a dessert made of pistachio pudding, nuts, whipped cream, pineapple, and above all, marshmallows. It first appeared in 1975– a concoction supposedly invented in the kitchens of General Foods – now Kraft – and has since appeared at picnics, church get-togethers, and other family events.

Its origin, however, is not in the kitchens of Kraft.  Originally, called “Pistachio Pineapple Delight,” Watergate salad was one of a vast range of “delights,” some dating back to the early 1900s. There was Marshmallow Delight, Valentine’s Delight, and Tropical Delight and delights by other names such as Pineapple Whip. The commonality was stated by this recommendation by Jell-O in 1926: “Serve it plain -or whipped- and combined with fruits, berries, nuts and creams. “ And so they did.

In the early days, the delights and other “salads” were innovative, exciting and full of promise.  Marshmallows were relatively new – the original marshmallow plant, a sticky difficult ingredient, could be replaced with a revolutionary new product – instant gelatin. As for the pineapple, and other delight staples such as candied cherries – they were readily available in cans. As for cooking – no worries. Woman could make the sumptuous dessert with without turning on the oven, thanks to an invention of 1913 – the commercial refrigerator.

The promise was more than an easy experience in the kitchen: husbands and children would love the result. Ads of the time showed a “housewife” with platters piled high with delight serving an eagerly awaiting husband and children with ads promising the dessert is “so good he’ll ask for more…”  The implication was clear: love the dessert, love the homemaker. Yes, the delight was a gateway to the love and acceptance every homemaker/cook so desired.

The delight’s spirit and ingredients live on. The pineapple. The nuts. The gelatin.  True the mothers have been replaced by older grandmothers who still consider sugary desserts a sign of good taste and affluence. And the availability of the delight has shrunk, making fewer appearances at family outings. As for the name? My guess is it evolved from snarky and satirical commentary during the Watergate scandal and eventually morphed into the formal name.