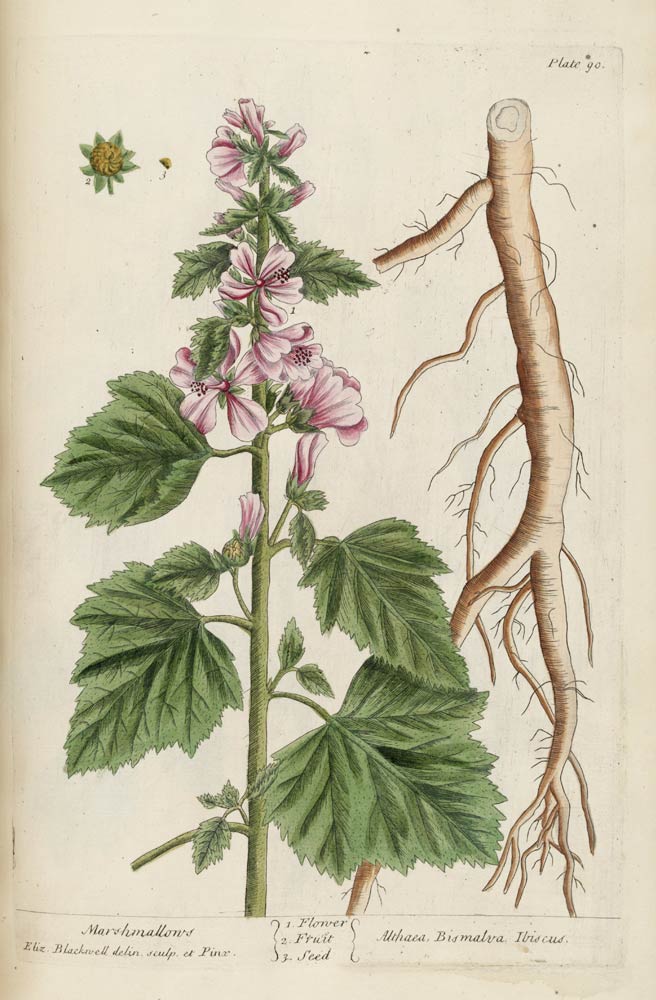 The Unexpected Origin of the Marshmallow: from Ancient Medicines to the Steam Locomotive

Uncategorized The Unexpected Origin of the Marshmallow: from Ancient Medicines to the Steam Locomotive

Yes, the marshmallow really is from the marshmallow plant.  The marshmallow plant, or Althaea officinalis, is a relative of the hollyhock, with pastel-colored, papery flowers.[i] The plant, especially its roots, have a sticky substance that once gave the marshmallow its taste and texture. Today, the root is available as a tea: the mucilage is like a syrup in hot water but thickens into a strangely sweet gel when cool.

The plant originated in Europe and West Asia where the ancients used it to treat coughs and sore throats. The marshmallow was also a sweet where the Ancient Egyptians boiled with sugar or mixed with honey around 2000 BCE.[ii] The result must have been very thick, very sweet, and very hard to make given the stickiness of the plant.

When the marshmallow appeared in the US is unclear, but the marshmallow candy originated in France around 1850 where confectioners blended the mallow root with egg whites, sugar, and water. By the mid-1800s, cookbooks such as the Complete Confectioner, written by Eleanor Parkinson in 1864, contained recipes such as this:

Boil down to 4 pints and strain; then add gum Arabic 1/2 a pound; refined sugar 2 pounds.

Evaporate to an extract; then take from the fire, stir it quickly with:  the whites of 12 eggs previously beaten to a froth; then add, while stirring.[iii]

Within thirty years, marshmallow candy was advertised as a penny candy. The recipes remained unchanged except for one omission: the marshmallow root. In its place, was an ingredient that took the food world by storm: the instant gelatin, which was developed around 1845 by Peter Cooper, the inventor of the Steam Locomotive, who was looking to make glue, instead.

For candy-makers, the gelatin enabled them to do something they probably yearned for: kick the marshmallow plant out of the marshmallow. It was too sticky, too unmanageable, and too expensive to use. They replaced it with gelatin. The marshmallow was fun, tasty and eclectic, effortlessly crossing the lines between candy and other foods. Newspapers had ads for such unlikely possibilities as Pineapple Parfait with Marshmallows, Almond Marshmallow Fudge, and Marshmallow Delight with more ingredients than you’d want to know.[iv]

The marshmallow also appeared deep in the candy bar, enrobed in chocolate, engulfed in caramel, sandwiched in the Girl Scouts’ S’more, and a turn-of-the-century phenomenon, the marshmallow roast. The marshmallow also morphed into the Circus Peanut, really made for the 19th century travelling circus,  which became the prototype for -who would believe it? – the 20th century Lucky Charms. One article in 1892 described them as the “Latest Diversion to Amuse the Summer Girl…” and provided detailed advice on how to brown the marshmallow without burning it. “When done they are morsels for the gods,” the author wrote, “resembling in flavor the most excellent meringue, with a delicious nutty and crusty outside.  They are a sort of sublimated combination of candy and cake, all in one bite.”

If you are not convinced, the author adds: “Marshmallow roasts are an excellent medium for flirtation, mutual regard between a young lady and a young gentleman being appropriately exhibited by nibbling the marshmallow off of each other’s sticks.” Personally, I never considered the marshmallow that way but it does give you something to think about.