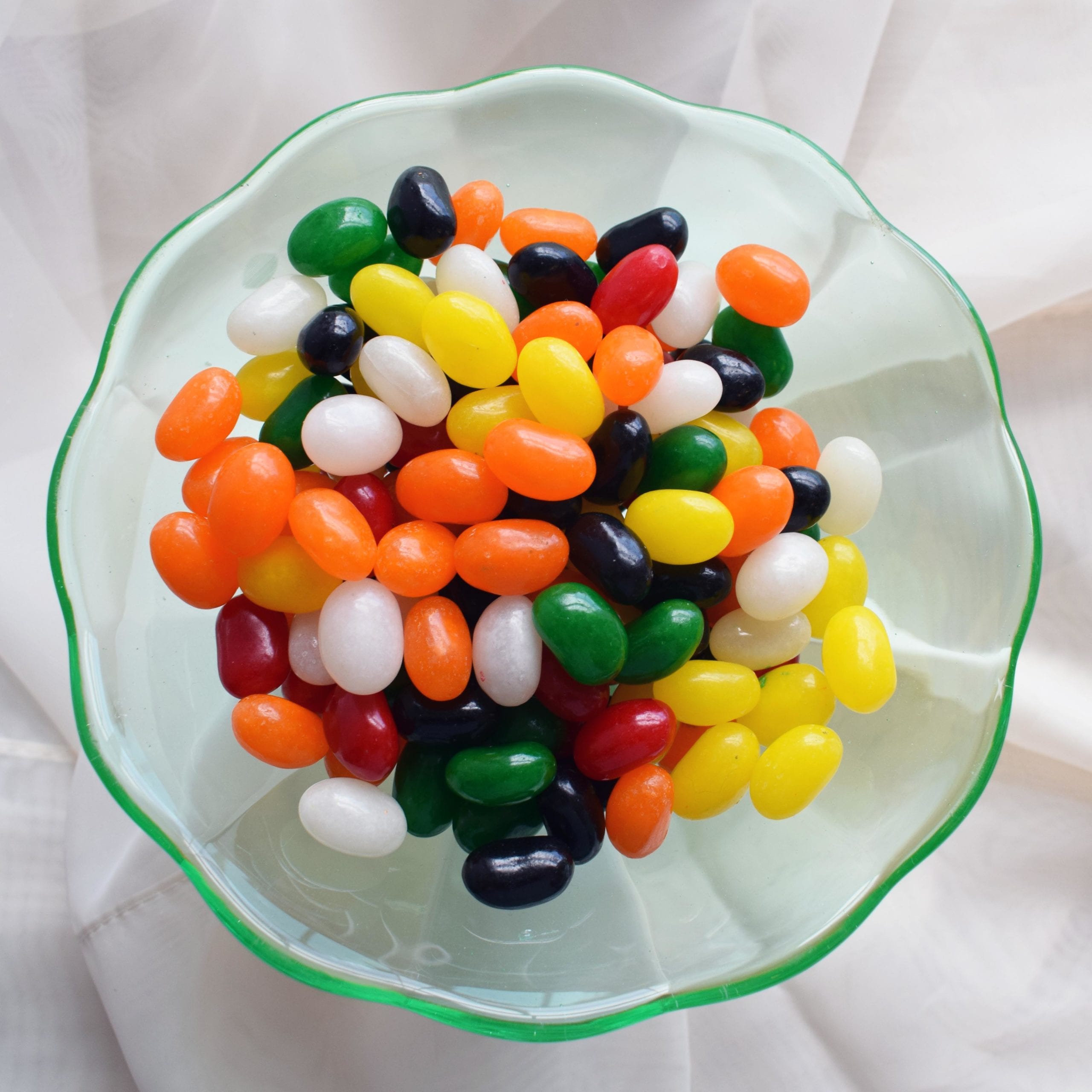 The Remarkable Journey of the Jelly Bean

20th century candy The Remarkable Journey of the Jelly Bean

The Remarkable Journey of the Jelly Bean

The history of the jelly bean is remarkable, crossing cultures and centuries, finding favor with sultans and proprietors at ancient apothecaries, living many lives as a war-time sweet, a literary symbol, an Easter candy, and, finally a year-round treat.

The beginning, in this case, is 226-652 AD. The place is the Persian Empire where the ruling power, the Sasanids, enjoyed a sweet called “abhisa”¹ made of honey, fruit syrups, and starch. Jump ahead to the 9th century and this treat was being made in Arab apothecaries as a remedy for sore throats. Its new name, “Rahat ul-hulküm,” was later shortened to the modern, “lokum,” meaning “throats ease.”²³

The sweet had a more or less humble life until the 1750’s when Sultan Abdul Hamid I fell in love with it and, according to legend, had his chefs prepare daily batches to satiate his many wives. Trade being what it was at the time, word spread, and folks in England started enjoying it, too, renaming it “lumps-of-delight.”

There, in the mid-1800s, it took on literary life, starting with Charles Dickens’ “The Mystery of Edwin Drood” (1870) where character Rosa Bud announces: “I want to go to the Lumps-of-Delight shop.”4 Soon, the candy was called “Turkish Delight”: a name which has endured in the English-speaking world ever since. Most notably, the Turkish Delight appeared in C.S. Lewis’ 1950 classic, “The Lion, the Witch, and the Wardrobe” where it reigned as young Edmund Pevensie’s greatest passion. Thanks to the book and, more recently, the movie, most Americans seem to know the Turkish Delight although far fewer have tried it. Or so they think.

In the mid-1800s an unknown candy maker in Boston panned the delight–a process originating in the 16th century of rolling a nut, seed, sugar crystal or other food in layers of sugar for a smooth shell. In 1861, Boston candy-maker William Shrafft is believed to have sent the new treat to Union soldiers and encouraged others to do the same.

Soon after that sweets become part of a new confectionery family known as “penny candy”: an inexpensive and fun sort of confection that allowed everyone, rich and poor, access to sweets. The Brooklyn Daily Eagle mentioned the candy on October 2, 1898, and soon a pound was selling at nine to twelve cents. (5) And it was in this new, penny candy guise that the panned delight took on yet another name: the “jelly bean.”

But why “jelly bean”? Obviously, it resembled a bean. But culturally, the name sprouts up everywhere; it referred to a fellow who shows up for a date well dress, nicely coiffed, but has nothing else going for him. F. Scott Fitzgerald wrote a story “The Jelly Bean” in 1922, in which he wrote: “’ Jelly-bean’ is the name throughout the undissolved Confederacy for one who spends his life conjugating the verb to idle in the first person singular—I am idling, I have idled, I will idle.” And Phil Harris wrote a song “Jelly Bean (He’s a Curb-Side Cutie)” in 1940. In other words, this guy was useless.

The jelly bean won its most enduring acclaim around 1930, as an Easter candy. The reasons are not entirely clear – perhaps because Easter, like other spring-time rituals, is about rebirth, and the bean is an excellent symbol. Regardless, early 20th-century candy makers were busy finding a market at religious events – the striped candy cane (the late 1800s) and the Christmas Ribbon (1925), to name a few.

Then came Jelly Belly. Candy distributor and entrepreneur, David Klein, came up with the name and the concept to infuse the entire bean with flavor. He outsourced production to the Herman Goelitz Candy Company who developed the idea and later bought Klein out. The jelly bean entered a new and illustrious phase of life, making appearances everywhere, from movie theater concession stands to corner store displays. They showed up at Jelly bean-loving president Ronald Reagan’s presidential inauguration in1981 and were the first candy to go on a space mission in 1983. In fact, people ate enough jelly beans last year to circle the earth five times. (6)

Has the popularity of jelly beans changed the candy? Spoiled it? Given it more cache? Actually, the jelly bean still carries its heritage as a confection beloved by the famous and not-so-famous, crossing cultures and histories, turning up in the most outrageous places, one delicious bite at a time.