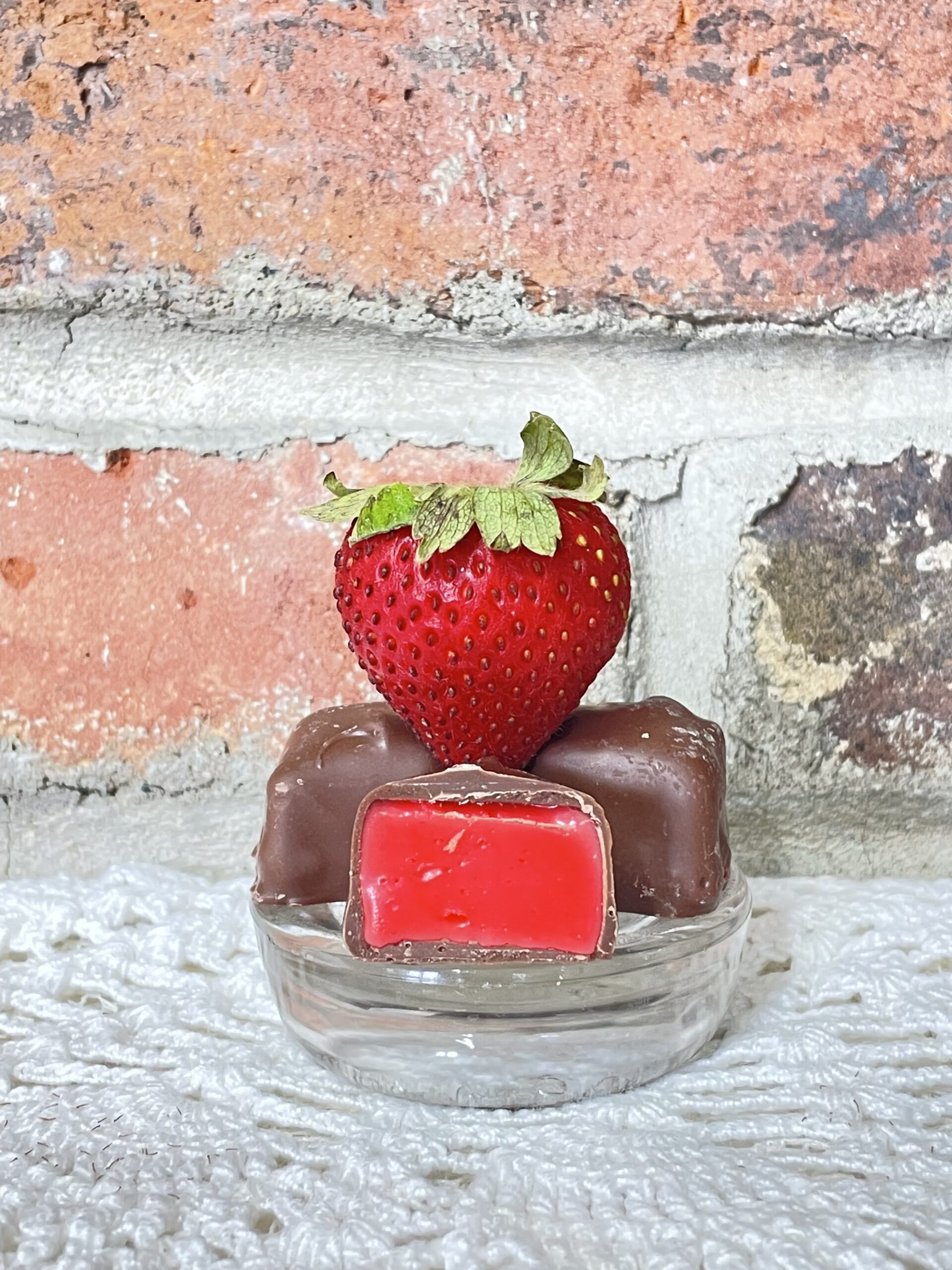 The History of the Illustrious Buttercreams

chocolate history The History of the Illustrious Buttercreams

Buttercreams are usually not first-in-mind for chocolate-lovers when deciding on just-the-right chocolatey snack. But, at one time, buttercreams and other cream candies, were the pièces de résistance of the chocolate world. Their story begins, of course, with chocolate itself and culminates in the heyday of chocolate innovations – the mid-1800s through the 1920s.

When did Americans start eating buttercreams?

Before there were buttercreams, there was the cacao tree which originated in Mesoamerica…and from this tree grew the cacao bean. The bean, by the way, springs directly from the trunk of the tree – a true sight to behold!

The cacao’s route was circuitous, to say the least, having left Mesoamerica for Mexico, to, variously, Native Americans of the Southwest and Spain with Spanish conquerors, then elsewhere in Europe, via the marriage of royalty from one chocolate-loving nation to another, THEN back on British ships to North America where European settlers got hold of it.

Chocolate in the “New World”

The first sighting of the cacao amongst European immigrants appeared in a petition drafted in 1670 by Dorothy Jones and Jane Barnard “to keepe a house of publique Entertainment for the selling of Coffee and Chucalettoe [sic].” The officials agreed although, as in Europe, chocolate had its detractors, primarily those who considered it a sin.

About 100 years later, an Irish immigrant, John Hannon, started the first chocolate mill, turning the cacao bean and its internal “nibs” into the ingredients for a coveted, if not bitter, drink. Hannon was brilliant but not entirely business-like and not at all wealthy. So, he brought in James Baker, a wealthy Harvard College graduate and businessman, for help.

The Birth of Baker’s Chocolate

After literal nose-to-the-grindstone, the company was producing 900 pounds of chocolate for the Colonists. Not all 18th century inhabitants were equal, of course, and neither was their chocolate. Baker’s shamelessly made three varieties: “No. 1 Premium” or “Best Chocolate” the purest, and most expensive line for the wealthy few; “No. 2” or “Common Chocolate,” was a grade below, and used by workers of European descent; and “No. 3,” known as “Inferior Chocolate” used by enslaved workers in the South and West Indies. This version was thick with rice – more a gelatinous brew than a satisfying drink.

The Hannon-Baker partnership ended for reasons unknown, but one thing is certain: Hannon went on a trip, possibly to the West Indies in search of cacao, and was never heard from again, likely killed in a shipwreck. The business was called “Baker’s Chocolate’, forever misleading people to believe the brand was just for bakers. 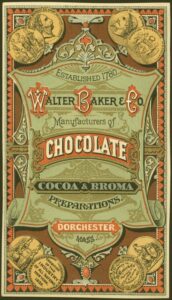 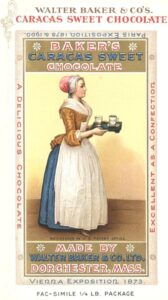 Then, as now, chocolate had many fans, some illustrious. One was Judge Samuel Sewall, who, from 1674 to 1729, kept a journal where he recorded uniquely commonplace goings-on, giving historians access to the lives of the Puritans and candy enthusiasts a glimpse of the early life of chocolate.

In his diary, Sewall wrote in 1697 about having “chockalett” and venison for a breakfast where “Massachuset and Mixco meet.” In 1702, he recorded bringing Minister Samuel Whiting “2 balls of Chockalett and a pound of figs,” because he was “languishing” and Mrs. Stoddard “two half pounds of chockalett” instead of Commencement Cake. Chocolate as medicine and gift was common, as were its alleged aphrodisiac properties. Today, in that regard, little has changed.

By the way – Sewall was a prominent merchant, and one of the judges who bestowed the tortuous sentences at the Salem Witch Trials. Within five years, he was wracked with shame and guilt, publicly apologized, fasted yearly in repentance, and became an early and ardent abolitionist.

Chocolate and the American Revolution

Other celebrated chocolate enthusiasts included Benjamin Franklin. He admired the exotic bean for its alleged health and medicinal value which included curing smallpox.  His shipments to officers in the French and Indian War included “6 lbs. of chocolate” (plus sugar, tea, coffee, vinegar, cheese, Madeira, Jamaican spirits, and mustard). His friend and fellow Revolutionary, Thomas Jefferson, said: “The superiority of chocolate, both for health and nourishment, will soon give it the preference over tea and coffee in America, which it has in Spain.”

Another benefit: chocolate was a great alternative to British tea.

How did Chocolate Taste?

This early chocolate was a bitter drink that wealthy New Englanders enjoyed at various times, particularly at breakfast or, possibly, instead of breakfast. They had to work to get it, too, first by boiling water which they poured over a cake of chocolate, then stirred constantly in a chocolate pot until the chocolate had dissolved, and, at last, the liquid was rich and frothy. (This process changed little from the original where chocolate was poured back-and-forth to create a frothy consistency.) Depending on the hour and purpose, they may have added sugar, spices, milk, or even wine, which they probably needed after all that effort.

Starting in the early 1800s, the Industrial Revolution was on the march and innovations were on the rise. While the U.S. was embroiled in a Civil War, Europeans were creating innovations in the world of chocolate. Among the leaders were the British Quakers with such familiar names as the Cadburys, Rowntrees, and Frys who went on to pioneer the use of factory methods for making chocolate and the steam engine for grinding beans. They also invented the candy bar!

The new possibilities for chocolate were endless, producing enrobed creations be they chocolate bonbons, truffles with gnash centers, or creams including “buttercreams.” They were voluptuous, yes, and the best ones of all were French. By French, the chocolates weren’t necessary from France, but were in the “French style,” such as the French style cream-filled candy, introduced in 1851 at the Great Exhibition in London. It won an adoring audience in the US, who had long been enamored in all things French.

The “French-style” creams and other chocolates were marvelous, sweet, yet gritty. Things changed in 1879 when Swiss chocolatier Adolphe Lindt (yes – that Lindt of Lindt chocolate) invented a “conching” machine, which massaged the gritty chocolate into soft and supple submission.

Buttercreams in the U.S.

So popular were these chocolates that some post-war U.S. “chocolatiers” devoted themselves to their existence. Others, such as the illustrious Shrafft’s Confectionary of Boston, made them en masse then wholesaled them to smaller companies. Schrafft also carried chocolates in their own retail shops, complete with the French-ish names such as “D’Or Elegante,” and distinct gold-hued packaging. Their ads said:

“From the French comes the motif for this distinguished package, but only Schrafft could have supplied such chocolates. Search among the most exclusive shops of London, Paris, Rome-you will find nothing to compare to them. The golden box of chocolates is now offered for the first time. It contains the daintiest of our French truffle, nuts, fruits, and cream centers.”

Not all creams were touted as being “French” but all did have upscale sounding assortments with names like “Society Chocolates,” “Lady Fairfax Chocolates,” and “Paradise Chocolate.” Their advertising was sensual and sublime. Here’s one from Mead Chocolate in 1920: “A box of Belle Mead chocolates is an open door to the magic realms of chocolatery where all’s delicious. Made from the purest ingredients moulded into sweets of rare delight-into bon bons and raspberry creams, into peppermint and orange paste, mapled creams and caramels, and many other luscious morsels.” 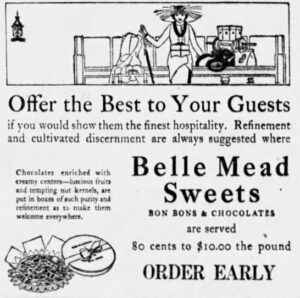 Gradually, creams, as well as other glamourous chocolates, found a new home in daily settings. During Prohibition, restauranteurs sold them as an after-dinner replacement for alcohol. During WWI and World War II, chocolate-makers recommended that families at home send packages to the troops – while supplies lasted. 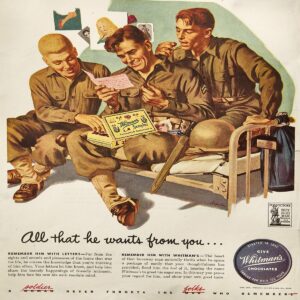 Today, creams have returned to their status as the perfect punctuation for events, tucked in Valentine’s Day collections, given as gifts – be it thank-you’s or birthdays, or bought and saved for just-the-right moment. As before, they’re still luxuriously sweet and flavorful.…with roots reaching deep into Mesoamerica.