This month, True Treats is celebrating SUMMER FUN! And, in a true historic tradition, summer fun includes MOVIES. And who better to feature than Popeye the Sailor Man who seems to appear in more beach scenes than any other old time character. It’s interesting to know that of all the characters in the Popeye series, Olive Oyl came first in print in 1919, with her true love  Harold Ham Gravy. No strongman, Gravy was replaced by Popeye in 1929, who was based on the real life Frank “Rocky” Fiegel. Fiegel, who Popeye creator E.C. Segar knew from his hometown of Chester, Illinois, was a one-eyed, one-time sailor, not-to-mention bartender and laborer with an expertise in fist fights. And, true to Popeye’s character, Fiegel had a soft spot for kids and a way of helping out when help was needed. It seems Segar regularly sent Fiegel money as a thank you for being his inspiration.

The first Popeye film was created in 1932 where he appeared with another female cartoon star – Betty Boop. Like Olive Oyl, Betty was a strong, don’t-mess-with-me woman under the guise of being a ditsy dame. Regardless, the Popeye and Olive Oyl combination endured and a slew of cartoons in print and film followed.  At that time, candy was making a presence at movie theaters, where they generated a magical amount of revenue, and at home. Such treats as nonpareils, chocolate covered raisins,  Milk Duds, Jujyfruits, Junior Mints, and Dots…among many others, became standard fare. So, it’s interesting that candy  spin-offs of the Popeye theme are few – Think Popeye Candy Cigarettes, now known as “Candy Sticks.” Never heard of them? Then you get my point.  Instead, Popeye culture focused on spinach and more spinach, creating an international demand….A good thing, all must agree.

DON’T WORRY:  As the number of movie theaters are dwindling, you can order movie favorites from old time to today’s Favs at True Treats – with the story of each on the label. 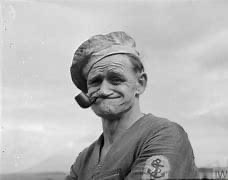