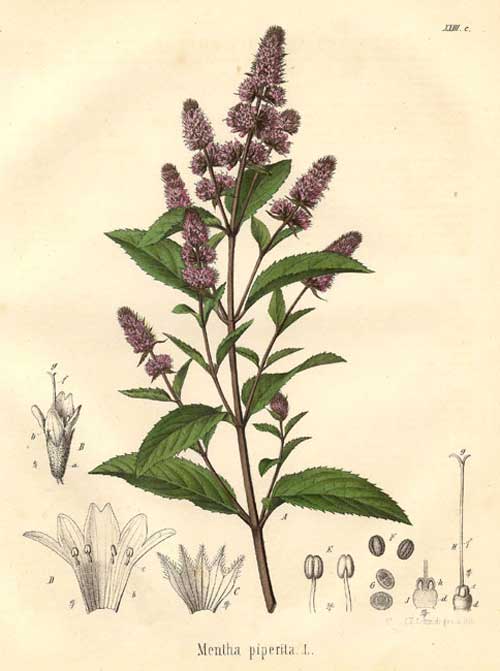 The Slow and Quick Rise of the Peppermint Plant

retro candy The Slow and Quick Rise of the Peppermint Plant

I recently got a call from a reporter at the Wall Street Journal, asking about the background of peppermint in the U.S.: Was it a breath freshener? A medicine? A treat?  The answer is “yes.” Peppermint was all this and more.

The peppermint originated as a naturally occurring  hybrid of water mint and spearmint. The exact date of this union is unknown, but the ancient Egyptians and likely, the Greeks, did use it. In Europe, the peppermint appeared in John Ray’s book Methodus Plantarum Nova in 1682 and was listed in the London Pharmacopceia in 1721.   From there, the peppermint’s popularity skyrocketed. It had a place in the gardens of the the early colonists who used the plant as a medicine as well as a treat in early versions of candy. It was tasty, effective, and grew and spread effortlessly, perhaps viciously: by the early 1800s, it was considered an obnoxious weed. People continued to use the peppermint, of course, but one man effectively drove the peppermint into primetime. He was New Yorker Hiram G. Hotchkiss.

According to an 1886 article in the McCook Tribune, Hotchkiss, then a “plump and robust” 75 years old, started out as a grocery-man when he was 18, but soon saw the future of peppermint – and the future looked good. With financial and agricultural prowess, he and a handful of others catapulted peppermint oil into an profitable industry, appreciated for its value in medicine for stomach aches and a joyous and equally appreciated candy.

When I say “candy” I mean it in the broadest sense. The peppermint was used as a breath freshener, in such products as the turn-of-century Pep-O-Mint Lifesaver, especially useful at saloons to mask the smell of smoke and drink; a holiday flavoring, especially at Christmas time; and an addition to everything from cocktails to cakes.

Today, the peppermint retains its value in all of the above, quite often encompassing all at once.