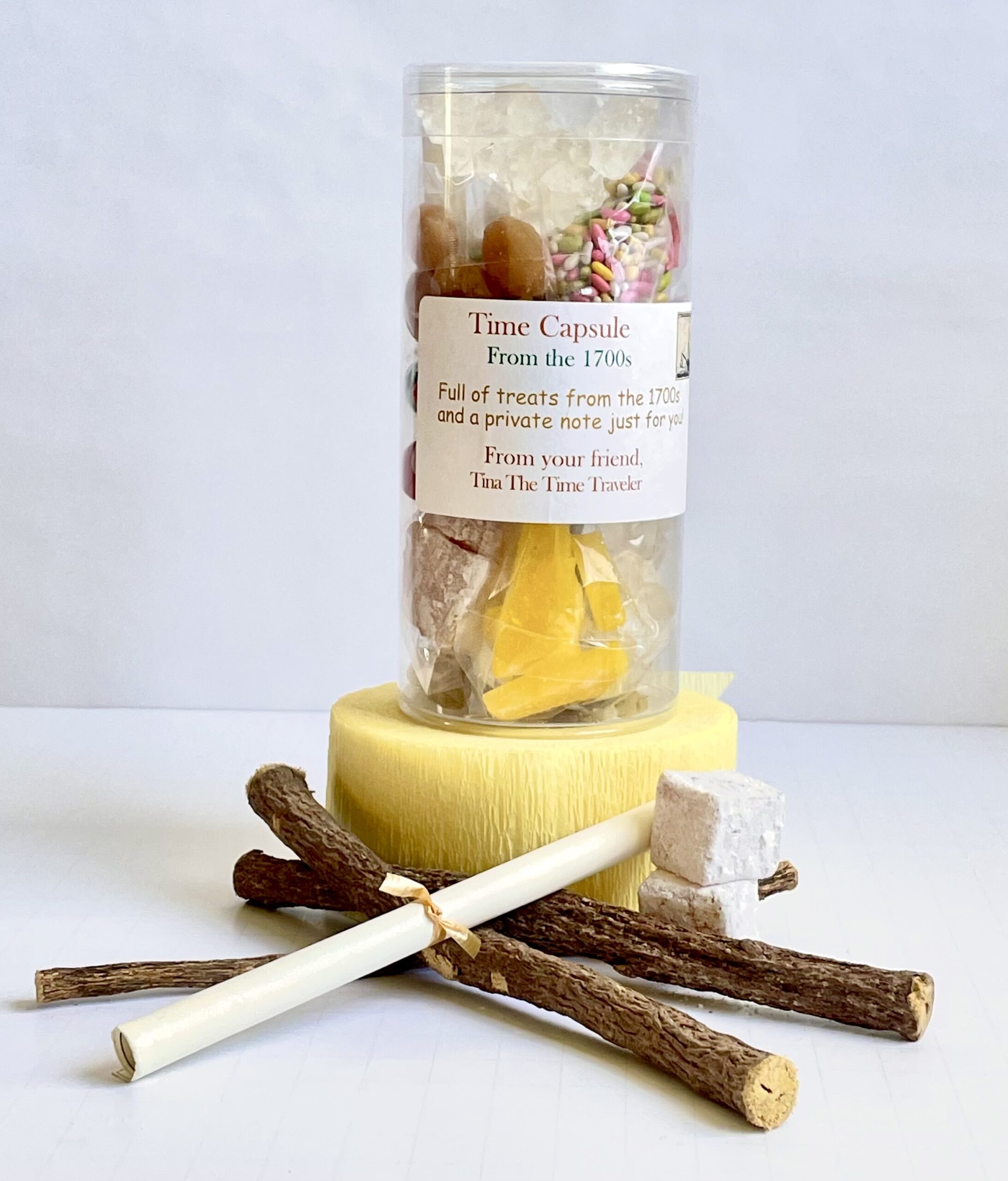 1700s Time Capsule with a Letter from the Time Traveler, in a stylish capsule

The perfect chance for kids to experience history in an entirely new way – a visceral experience where they taste the flavors of the past, with samples from the Colonists, Native Americans, and others of the time.  The time capsule is filled with ten items in all – such as candied peels, Turkish delight, sugar plums, licorice root, rock candy and stain glass.  Most important, they’ll find a letter from the Time Traveler written just for them, telling them about each selection. They’ll also find a sampling of modern  candies as a point of fun and comparison.

Selection may vary slightly depending on availability.

The 18th century brought a blend of flavors and uses of food, eaten by European immigrants, Native Americans, and enslaved workers from Africa and others. What they ate and how they used these foods is as surprising as it is enlightening. Much was prepared, although some came directly from the earth.

Did people eat sugar in the 18th century?

Sugar was used as a medicine, fermenting agent and preservative not to mention an enjoyable treat. The kinds of sugars depended on who was eating it – maple syrup, fruit sugar, and cane sugar were all alternatives. No one, at the time, considered sugar “bad” for you – it was critical to survival then, as it is today.

What kinds of candy did people eat?

Hard or boiled sugars – what we now think of as hard candies – were enjoyed for refreshment, but also contained various herbs and spices used as curatives. One example is stain glass, named for its resemblance to the actual glass, aka hard tack. Turkish delight was popular throughout Europe, the Middle East and Mediterranean, although it was known by other names, primarily for its early use as both a delicious treat and as a curative for  sore throats. Today it is a popular, all-natural and vegan selection!

What are “sugar plums”?

Sugar plums refer to several things – one is pretty much any candy. But they also refer to a specific kind of candy, a seed or nut covered by layers of sugar. The word “plum” did not refer to the fruit, but to the word “good” – as in good (or tasty) sugars. Modern examples include Jordan almonds and Jaw Breakers (inventors used a sugar crystal instead of a seed or nut).

Where can I find more information about candy from the 1700s?

You can find lots more examples in our 1700s section. Want to become a taster? Get updates about NEW and exciting OLD candy, snacks, and drinks? Sign up here.