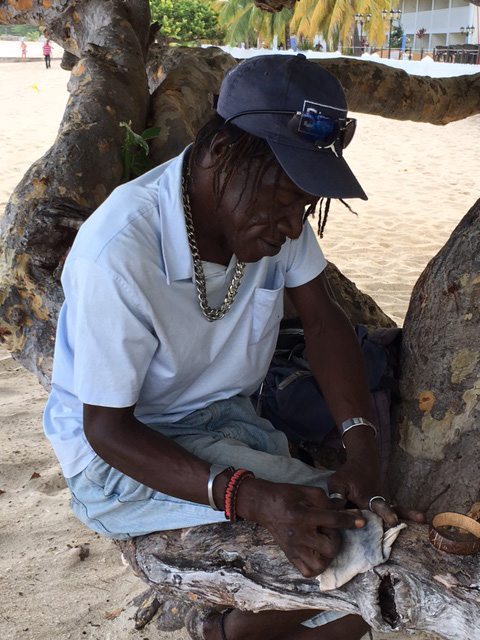 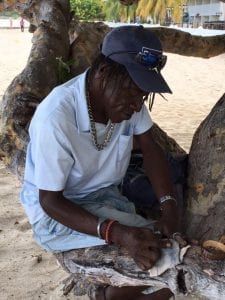 Alvin Heinz spends much of his day in a tree outside the Radisson Hotel at the Grand Anse beach or at St. Georges when the cruise ships come in. He carves coconut shells into polished dolphins, palm trees, nutmegs, and other medallions which he sells to tourists. His job, he says, is to make sure they have a good time on the island. When they come, he says, they bring money.

I am 46. I was raised by my great-grandmother. My grandmother lived with her mother. We would all wait for money from my mother. She lived in Trinidad. I was born there.

To make more money, my great-grandmother made chocolate rolls that she sold to the people in the village that they melted into tea. Everyone bought chocolate for the weekends, so on Friday, we made three times the amount.

For meals we got a coconut, put sugar and limes in the juice and that’s what you’d eat. You’d go to the garden close by and get bananas and cook them and make bread fruit and yams, mangos, plums. There were a lot of fruits you could survive on. You can’t go hungry that way.

The fruit grew through generations. One banana tree puts out another – in a few months there are other banana trees. You don’t need to cook for the kids – they had bananas, mango, sugar cane. If a neighbors’ tree had lots of mangos, all the kids would come and get it. The neighbors shared – they had plums, mangos, paw-paws, cane sugar. Nutmeg supported the family for years – from children to grown-ups. We used it as a spice – and for cooking, pastry and cakes. Some sold them to market vendors.

All the trees got its use. Bamboo was the main thing for brooms, baskets to carry the cocao and other things. Or you would put wood together in a big pit fire to make charcoal. It would sit for days. People didn’t have gas or electricity – the food was cooked on three stones and a pot.

There weren’t many doctors. You go to the person who has the most experience. They say, go to the river and get this and you get it and in a few days you are OK. No one had vehicles. Everyone had a donkey that we put in one place, like horses. The donkey carried the load, we fed the donkey and got fertilizer for the garden. We had rabbits, goats, all animal feces went back to the garden. Everything grew right there.

Most people worked on estates. There was lots of land – like slave land. They did work for the estate owner to sell to the big companies. People would leave their homes, and work for a certain amount – no matter how big or small, you have to get that amount to survive.

Banana, cacao and nutmeg. It was hard but at the end of the day, we are here now.

As described at the GCNE Nutmeg Pool

According to Alvin, the spices and the natural fat in the cacao held the balls together