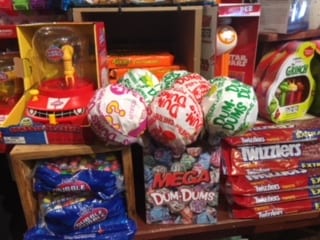 The Dumb in Dum Dum

I recently visited Cracker Barrel – a regular event for me, as the food chain has the broadest assortment of old time candy anywhere. Their offerings are a window into what’s next: they’re the first to get new old-time candies; they know what sells and doesn’t, creating a road map for other candy-seller’s decisions; and their cluttered, bountiful lay-out can be an inspiration to us all. But, what I saw this trip was less inspirational and more disturbing.

Cracker Barrel has gone mega. The company has cut back on ordinary candy that can fit in your fist, featuring instead candy that is taller than a two-year-old. Among them hip-high packs of Twix, Twizzler packs bigger than a loaf of bread, and Dum Dums lollipops the size of your head. Naturally, a few questions emerge: where can you store such things? Don’t they get disgusting over the weeks and months it takes to eat them? And, what’s the point?

When candy emerged in the mid-1800s, it enabled working kids, including, for once, working class kids, to have access to the middle class. For generations after, children purchased bits of this and that at penny candy stores and apothecaries, better known in my lifetime as drug stores.  Candy was passed down to grandchildren, given as a favor a birthday parties, and rituals at religious holidays such as Easter. Candy was something we knew – and still know how to eat. Not vast quantities sprawled on a plate but reasonable amounts which might explain why Americans get approximately 6% of their sugar and around 5% of their calories from candy.

Even the crassest marketing efforts have a sweetness about them. The Dum Dum, for example, was made in 1924 by the Akron Candy Company and named by I.C. Bahr, a sales manager. He reasoned that kids could remember the name and ask their parents for them. The strategy worked and today the Spangler, who now owns the company,  produces 12 million Dum Dums per day and about 2.4 billion Dum Dums each year, many of them free-bees dispensed at banks and other places.

One Dum Dum lasts about five minutes, which is all the time you really need.

The mega-candy, much like other mega-foods, turns a treat into a gluttony, a brand into a commodity, a memory into a collectable, and, above all, a food experience into a purchase…and so little else. As for us at True Treats – we’ll carry the original size and sometimes even give them away for free.