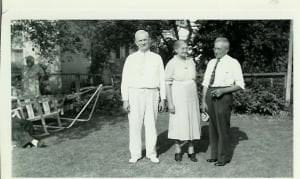 I was the first grandchild in my family, and being the oldest, I was the only grandchild for years.  When Easter came around I would go to my grandmother’s house. This was around 1935 through 1938. My grandmother gave me an Easter basket filled with hard-boiled eggs and jelly beans, twice as big as the one’s today. When I finished what was inside, I could eat the basket- I don’t remember what it was made of exactly…licorice, I think.

My parents didn’t have much money. My father worked for the International Harvester company. He had to work long days with no vacation time. That was before unions.  As time went on, he got laid off because of strikes and general lay-offs.  During those times, he worked husking corn to bring in money and only made three dollars a day.

Going to my grandmother’s house was a real treat.  My grandfather worked for the railroad in an office. They had a parlor and living room with a mantle clock that chimed. They gave me things I never had at home, like butter and bananas. They seemed so luxurious back then. They also had a piano and at Christmas, my aunt would play songs and we’d all stand around and sing.

In the summer, my grandmother set up a little rod iron table that had belonged to my aunt when she was little. It was white, not like the one’s today, with a sideboard and chair. She gave me Ritz crackers and a glass of water and some sugar, I think.  I would pick peppermint leaves and make a delicious drink.

Later, the other grandchildren came along. My uncle had eight children and it got too expensive for my grandmother to give all of us a fancy Easter basket like the ones I had. I was lucky to be the oldest…I remember those Easter baskets with the jelly beans and boiled eggs well.