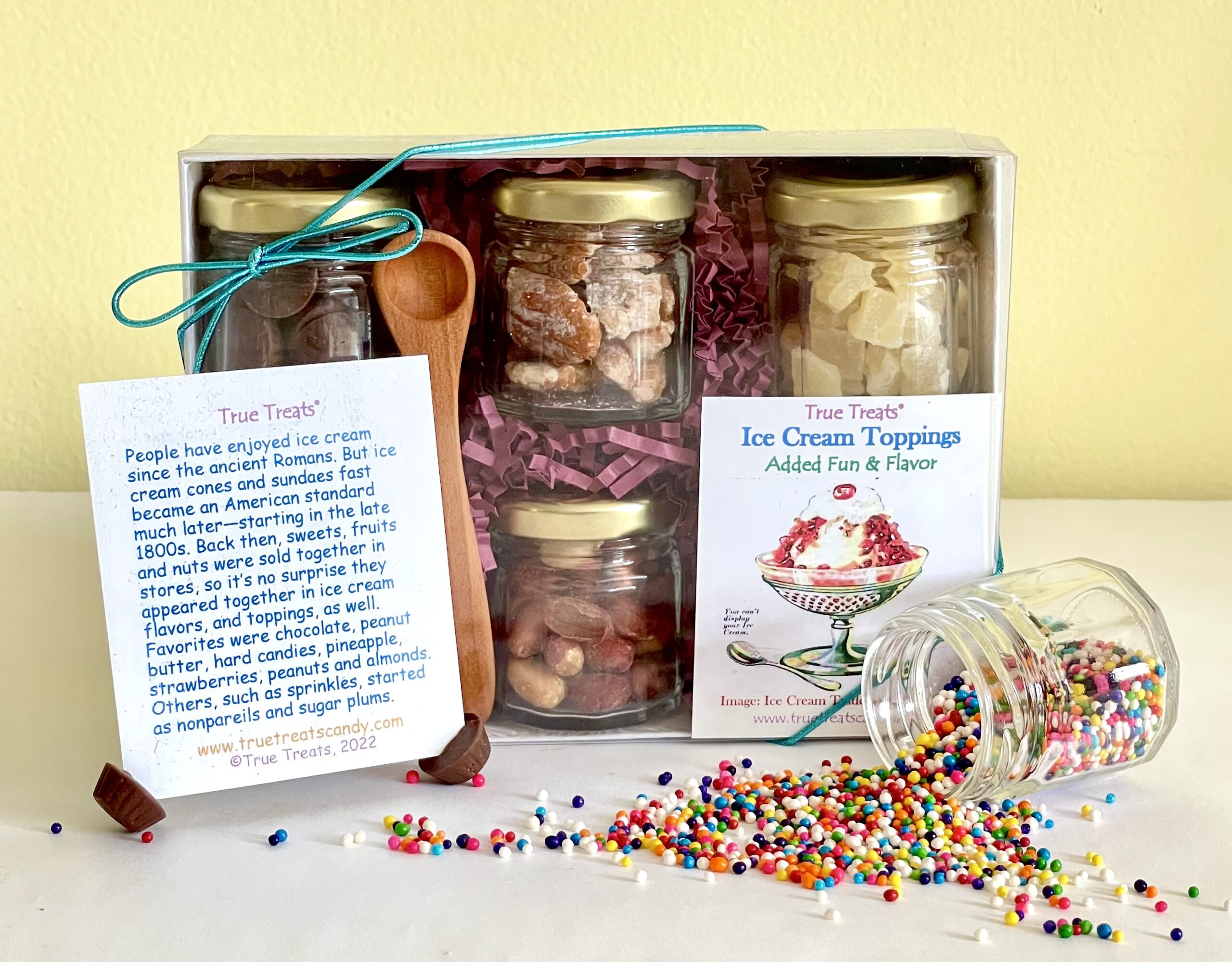 All About Wonderous Ice Cream Toppings

All About Wonderous Ice Cream Toppings

Ice Cream is by far an all-American favorite – ever-present at birthday parties, summer vacations, miniature golf “courses” and at the end of hard days when a break is definitely in order. I remember my father running out on an occasional evening to Friendly Ice Cream Store, a chain that started in Massachusetts, to buy take-out SUNDAES!

The very mention was enough to make the heart pound…then the choice. What kind of ice cream? Dish or cone? And THEN – the TOOPPPINNGS! So many to chose from. BUT WAIT – why choose? For me, it was marshmallow plus hot fudge plus whipped cream

So, when I considered the best way to celebrate summer this month, I thought what better way than to research ice cream. But not JUST ice cream. Ice cream toppings, that, let’s face it, make the ice cream experience complete. What I found was, in some ways surprising, in other ways, well, as it should be.

Before I start, though, a few words about ice cream cones and sundaes, the quintessential treats. These wonders of Americana were actually newcomers in the fun food scenes –the cone and sundae were invented somewhere between the 1890s and early 1900s – no one knows for sure. At the time, chewing gums, chocolates, and hard candies, not to mention cakes and pies, were old news.

Popular flavors of both ice cream and toppings around that time were fruit-based – pineapple and strawberries prime among them. Many of the fruits were turned into syrups, others chunks of actual fruit that cascaded from the ice cream to the dish or napkin. That was, of course, mainly for sundaes.

Ice cream cones had another claim to toppings – sprinkles aka nonpareils, which had a venerable, centuries-old history and the “jimmies” a more recent Massachusetts contribution. Today the lines between the two are blurred, but just to be clear – sprinkles, little colorful round sugar balls that crunch in your mouth and jimmies, longer and softer but equally rainbow colors (except chocolate) for maximum effect.

One way or another nuts played a part, as well – either in the ice cream or on it, with peanuts, especially Spanish peanuts, almonds, and cashews among the favorites. Of course, some were on the fancy side, think: cinnamon almonds, and pecan pralines, both established treats at the time. Marshmallow – especially marshmallow topping – was relatively new, made from a mid-1800s invention, instant gelatin.

What I found so surprising –yet not unexpected – was the prevalence of fruit and nuts. Not, like today, an afterthought, but the pièce de résistance. At the time, these natural items were actually to the universe of candy and ice cream, sold together on shelves, in displays – one loving family of food. The advertisements used descriptive words, worthy of embarrassment – “sumptuous,” “mouth-watering” and “tantalizing” about fruits. The nuts were “jumbo”, and “fresh”, just off the boat from some far-off land.

Likewise, the toppings were fruit and nut-based, even chocolate syrup was described as the product of the exotic Central American cacao tree.

Much has changed about ice cream over the years, what with the outrageous colors and unheard-of flavors, imposters of the natural selections that came before. But the toppings, I am proud to say, have stayed the same.

Cheers everyone and enjoy!